The kids are alright 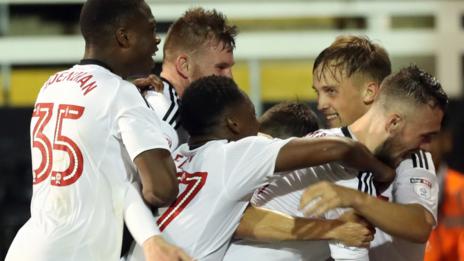 For the second round in succession, Slavisa Jokanovic gave some of the brightest talents in Fulham’s academy set up their head in the EFL Cup and, once again, they repaid their head coach’s faith with a fine victory. Last night’s success was far more impressive than seeing off Leyton Orient, however, as they showed reserves of fitness and determination to take Premier League Middlesbrough to extra time and constructed a goal of real quality to apply the killer blow with the prospect of penalties just around the corner.

Jokanovic has performed wonders to turn a first team that was limping towards the relegation zone into a side with genuine ambitions to challenge at the other end of the table in just nine weeks with eleven new faces assimilated into the picture, but perhaps the bigger story is the continued triumph of the Motspur Park production line. Last night’s line-up might again have been a nod to the Fulham board about the paucity of senior professions Jokanovic has at his disposal with the transfer window due to shut in less than a week but the fourteen players used included eight academy graduates and featured only four men above the age of 23.

Where Kit Symons graduated from youth team coach having nurtured a host of young talent, Jokanovic has been bold enough to give them their head in the first team. This was his boldest selection yet when you consider that Aitor Karanka fielded a team featuring the likes of Daniel Ayala, Ben Gibson, Adam Clayton, Stewart Downing and David Nugent. Up against Clayton and Downing in the Fulham midfield were 17 year-old Dennis Adeniran and 18 year-old Tayo Edun – neither of whom looked out of place. Adeniran showed great maturity in shrugging off an early booking to be quietly efficient at the base of the midfield, whilst Edun improved after a slow start, producing one wondrous bit of skill to fashion a chance for Cauley Woodrow. The sight of the pair of teenagers embracing in a jig of delight after the final whistle was one of the moments of the evening.

Jokanovic’s decision to turn to Luca de la Torre during extra time as a replacement for the tiring Jozabed was inspired. The American midfielder had flickered brightly at patches at Brisbane Road, but immediately gave Fulham an outlet behind the imposing figure of Matt Smith and frightened the Middlesbrough defence with his eagerness to run into space and carry the ball beyond defenders. The winning goal came directly from his dangerous dribble into the final third and he showed great intelligence to thread a ball out to Scott Malone on the left having been two men and arrived at the edge of the box when the temptation would have been to try and test Brad Guzan.

The fact that it was Lasse Vigen Christensen who pounced on Malone’s fine low cross capped off the night perfectly. Christensen’s emergence under Symons into one of the first names on the team sheet was nothing short of phenomenal and justified Fulham’s faith in handing him a long-term professional deal as a teenager, but injuries robbed him of a chance to build on the outstanding success of his breakthrough season. With a flurry of arrivals in midfield, you feared whether Christensen might get left behind but he has shown great character and taken his chance. Against Cardiff, his clever feet in the final third gave Fulham more drive once he had arrived as a substitute and, last night, one of those famed late runs that we hadn’t seen for a few months slayed top flight opposition.

The draw may have handed Jokanovic a third chance to give some of his youngsters a taste of senior football. Bristol City will be a good representation of the sort of opposition the first team will face throughout the campaign – and the EFL Cup contest comes only a matter of days after a league game between the two clubs at Craven Cottage, so experimentation might well be the order of the night again. Last night was a moment to savour the work of Malcolm Elias, Huw Jennings, Steve Wigley and Alistair Mackintosh in constructing an academy that continues to produce little gems and, with Jokanovic now insisting he’ll remain at the helm, Fulham’s future looks bright down by the Thames.