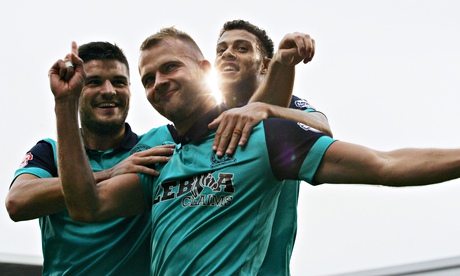 Kit Symons has left nobody in any doubt that he would love to become Felix Magath’s permanent successor at Fulham. The former Fulham centre back has been in a key figure in the rise of the club’s much-heralded Academy since he retired from playing and took up part-time scouting duties with his old club, coaching both the club’s Under 18s and Under 21s with significant success. In his third role as a caretaker, Symons has designs on the top job but his first audition for the main role was spoiled by the sending off of defender Sean Hutchinson for a wild tackle shortly before half-time and the predatory instincts of Jordan Rhodes, which denied a spirited Fulham side the point their gutsy performance might have merited.

There was plenty to like about Symons’ first game in charge, especially as it come less than 48 hours after the departure of Felix Magath following the 5-3 reverse at Nottingham Forest on Wednesday night. There was a return for World Cup star Bryan Ruiz, among several players seemingly frozen out towards the end of Magath’s 217 days in charge, although the Costa Rican captain clearly needs game time before we can see the skills that carried his unfancied nation all the way to the last eight in Brazil. Fulham were well-drilled and well-organised but lacking the killer instinct that a poacher like Rhodes, with whom they were heavily linked last season, provides in the opposition penalty box.

For all their organisation and desire, Fulham fashioned few clear-cut chances in a first half that was high on endeavour but low on real quality. Hugo Rodallega, whose partnership with Ross McCormack prompted a brief second half revival at Forest in midweek, fluffed the best opportunity, sending a low shot inches wide when he perhaps should have done better after a fine Fulham seized on a mistake by Tom Cairney. The game turned on the sending off when Hutchinson tried to atone for a heavy touch having carried the ball out of defence by lunging in. His two-footed tackle left a nasty mark – and thankfully nothing more – on Blackburn’s Lee Williamson and there could no complaints after the distraught defender, who had conceded a controversial penalty at the City Ground, was sent off.

Without a centre back and a man down for the remainder of the contest, Fulham were always vulnerable to the sucker punch as they pressed on regardless. The winner – a scrappy goal – arrived just before the hour. The home side failed to properly clear a Blackburn corner and Corry Evans’ deflected shot fell kindly for Rhodes, who finished with aplomb. There was plenty of fight from the ten man, but no equaliser despite their best efforts. A quick counter-attack created a chance for Ross McCormack but Jason Steele got his angles right to produce a smart save and Tim Hoogland’s late swivel and shot flashed just wide of the near post.

Owner Shahid Khan will be hoping this managerial change will produce a greater impact than the two in Fulham’s last calamitous campaign as another relegation is a distinct possibility for a side – short on quality – that have now lost seven of their first even games.