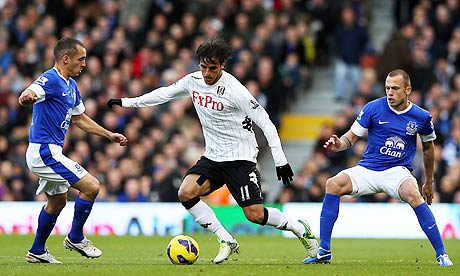 Werder Bremen and Fulham are playing hardball over the price tag that will determine whether Bryan Ruiz makes a permanent move to Germany before the end of the summer transfer window, according to the German tabloid Bild.

The German newspaper reports that Werder have quickly concluded negotiations with Ruiz’s representatives over personal terms, which would see Ruiz earn around €2m a year, but have entered protracted discussions with Fulham chief executive Alistair Mackintosh over a suitable fee. Fulham are holding out for something close to the €6m (£4.79m) they have been offered for Ruiz by Besiktas, whilst Werder were willing to wait it out and pay around €4m (£3.2m) for the midfielder’s services closer to the close of the window.

Fulham’s negotiating position is weakened by the fact that Ruiz, who captained Costa Rica to the World Cup quarter finals in Brazil this summer, has less than a year left on his contract at Craven Cottage. The 29 year-old is not keen on a move to Turkey and is believed to prefer the prospect of the Bundesliga as opposed to remaining in the Championship with Fulham, for whom he has not featured since being sent to PSV Eindhoven on loan by Rene Meulensteen back in February.

Felix Magath is planning Fulham’s immediate future without the former FC Twente playmaker, who has scored eight goals in 75 appearances since signing for the club in August 2011, telling the press after the 1-0 home defeat by Millwall on Saturday:

After his tremendous World Cup performance, he wants to leave to play at the highest level. I don’t rely on players who will leave.