Could this be Kasami’s year? 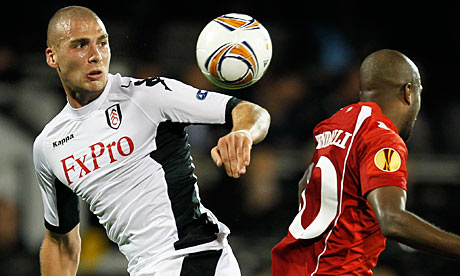 Could Pajtim Kasami play a more pivotal role in his second season at Fulham?

It seems fashionable to view every football manager’s job as ‘a project’ these days. Andre-Vilas Boas has just embarked on a new one in north London, hoping to mirror the early success of Arsene Wenger, who must be wishing he could turn the clock back to those glory days. Roberto Mancini’s ‘project’ at Manchester City began with what was viewed as a harsh sacking of Mark Hughes but that decision now looks like one of the smartest a football club has ever made as the ever-engaging Italian added some real flair to what initially was a dour, disciplined team that operated on the counter-attack and shut up shop once going in front.

What do make of Jol’s project so far? Of course, just a year in, it’s very difficult to judge. His chief aspirations on arrival were to revamp the playing style and reduce the average age of a squad that contained plenty of experience but was rather plodding and predictable. He’s certainly done both but football fans demand certainty even when the game can only offer intrigue. Jol’s more fluid approach has been described as ‘total football’ but that understates the transition from a rigid English structure, with clearly defined defensive roles for the wide players, central midfielders and even a striker, to a looser 4-3-3/4-2-3-1 that encourages movement and demands that the forward players interchange positions regularly.

Such a system requires a few free spirits who possess pace, stamina and high levels of technical ability as well as being exceptional readers of a game. In his very first press conference, Jol stressed the need for the speed but his initial assessment of the squad will have shown that he had inherited very few rapid individuals. The biggest area in need of an overhaul was a midfield that was at times pedestrian – largely because it lacked players who could burst through from central areas or break away thanks to a trick or a turn of pace.

Just over twelve months on from his appointment and the picture looks somewhat different. The reinvention of Moussa Dembele from a roaming forward to a midfield playmaker was a tactical masterstroke and the nonchalant ease with which he skips past opponents offering a different dimension to Fulham’s approach play. Factor in the emergence of Kerim Frei and Alex Kacaniklic, who are both skillful and no slouches on either wing, and Jol’s closer to constructing the template for a side that can attack in a number of different ways rather than being cautious and hoping to nick a goal on the break, which seemed the sum total of Fulham’s ambition away from home for three or four seasons.

Of course, the big question mark is over who might replace Danny Murphy. But, as I argued when the news broke that Murphy was heading to Blackburn for a medical, it’s a rather moot point as you won’t find a replacement for Fulham’s former captain – and if you did, he would cost big money. Murphy’s experience and successful alteration from an advanced midfield operator to a deeper-lying orchestrator of attacks who successfully shielded the back four was one of the key reasons why Fulham were able to go from staving off almost-certain relegation to a European final in a blink of an eye. But in a less regimented system, the side’s reliance on Murphy would diminsh.

Jol’s reshaped central midfield will certainly include Mahamadou Diarra, who briefly replaced Murphy in the second half of last year. The Malian is more than just a defensive midfielder as his late marauding runs in the box, which heralded a first goal for the club up at Bolton, and his range of passing, illustrated by the cleverly disguised pass that released Clint Dempsey for the fifth goal at home to Wolves, demonstrate. Dembele – should he stay – will be the preferred pick alongside Diarra, but there are other options as well.

One of the most fascinating possibilities is why Pajtim Kasami might fit into the picture. The Swiss midfielder was a surprise capture after a successful single season with Palermo where he flourished under Delio Rossi, making 23 appearances as an eighteen year-old. Kasami had an eye-catching start to his Fulham career, with a couple of early energetic Europa League performances, whipping over a few dangerous crosses and corners with his lovely left foot and having no hesitation about introducing himself to English football with a tough tackle or two. People might have raised eyebrows at his sudden disappearance from the first-team picture after he rattled the bar with a penalty at Stamford Bridge, but this was always a developmental season for Kasami.

He made just 15 starts for Palermo in 2010-11 and Martin Jol offered him eleven in his first year in English football. With a bit more luck – and a less impressive assistant referee than Sian Massey – Kasami might already be off the mark in terms of goals for the club. He starred in the dismantling of Dnipro at the Cottage in August – playing a part in all three of Fulham’s goals – and his development continued in the reserves, where he scored three goals and made three more as the club’s second string finished the season very strongly.

Kasami’s been a prodigious talent from a young age. He was a key part of the Swiss under-17 side that surprised everybody by winning the 2009 FIFA Under-17 World Cup in Nigeria and his high-octane displays for the under-21 side, for whom he found the net three times last season, have earned him a place in Switzerland’s Olympic squad this month. Still only 20, Kasami was encouraged enough by his start to life in London – and Jol’s belief in his ‘great talent’ – to reject an early return to Italy with Juventus last January and fight for a spot in Fulham’s first team.

There’s something endearing about the shaven-headed midfielder and it isn’t his training ground high-jinks with Matthew Briggs. Instead, you feel that it’s worth watching Kasami when he’s on a football pitch. He can cross and shoot from range as well as take a mean set-piece and his technical skills, combined with that tenacious streak, mean he could play either behind the striker – a position for which they’ll be plenty of competition this season – or, eventually, in the heart of a midfield. He’s served his apprenticeship and I think the signs are encouraging: let’s hope this could be his breakthrough year.