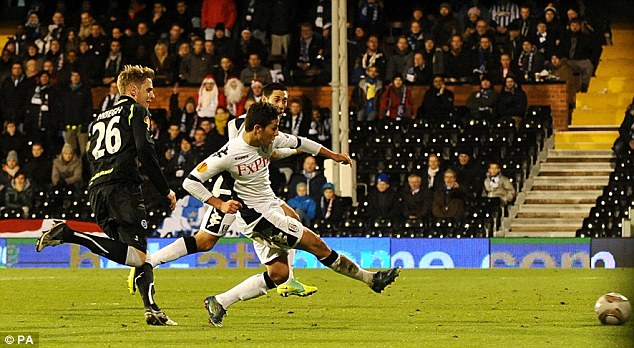 Fulham are fortunate enough at the moment to be blessed with alot of talent in our pool of Under 21 players. Trotta, Briggs, Kacaniklic, among others, have all had their impact in the first team and the reserves. However, without doubt no player has made an impression like Swiss/Turk/Moroccan/Austrian (take you’re pick, he’s eligible for all four countries) youngster Kerim Frei. The 18 year old has almost reached two dozen appearances this season – over half of them have come in the league – and they have all come from the merit of his own ability.

Picked up fairly under the radar in early 2010 from Swiss club Grasshopper Zurich, Frei enjoyed regular appearances in the U18 and Reserve leagues, impressive with his quick feet, explosive burst of pace and control of the ball at speed. His breakthrough moment came soon after Jol’s arrival. With the promise of a new philosophy based on developing young players Frei’s talent couldn’t be ignored by the Dutchman and in only his second game in charge Jol gave Frei his first team debut, aged just 17, coming off the bench in a short cameo away at RSI Runavik in the first round of the Europa League.

The early season European games gave Jol the opportunity to test his young players at a competitive level, an opportunity Frei in particular was afforded and he made several more appearances in European competition, including an eyecatching display away at the Crusaders. There was now a buzz amongst the fans about Frei; we were aware that, perhaps for the first time since Sean Davis, we had a genuine Academy talent on our hands. Still, there were some fair reservations, the calibre of opponent we had seen him against was fairly poor and we hadn’t seen him for an extended period in a game.

That all changed on Frei’s first domestic Fulham start. Having drawn Chelsea away in our first round of the League Cup Jol opted to go with the untried and untested, playing a line up which included Ruiz, Sa, Gecov and Grygera. It was Frei however who stole the show with a blistering display of skill and pace which belied his age. It was a game we no doubt should have won with a penalty won by Frei, who was pulled down in the penalty area through on goal having done Alex one time too many (he walked for the foul too), but it was unfortunate that Kasami, another impressive performer on the night, missed a penalty and defied team instructions in the process.

Nevertheless, Frei entered a man of the match peformance and announced his arrival as a legitimate member of the Fulham first team squad, not as a token gesture of his age but because of the talent he possessed. He became a familiar face to Fulham fans and by New Years Day he had managed to score his first Fulham goal and make his first league start (again away at Chelsea). His contributions against Odense at home was particuarly noteworthy, first setting up Dempsey via Zamora with a fiendish burst and pass down the left hand side, before popping up in the middle and making a superb run off the ball to give himself a chance from a Dembele pass which he finished with aplomb. However as well as displaying his talent he displayed his naivety in equal measure; with just 20 seconds to go of the match at 2-1 he tried a Marseille Roullette in the Odense box which backfired spectacuarly when he lost the ball. The rest, as they say, is history. The moment was significant but was just a blip on Frei’s CV which was becoming ever more impressive, following impressive performances at Swansea, Chelsea and Norwich.

The sky seemed the limit for the young winger but fans began to get away with themselves (don’t worry, the irony is intentional), calling for Frei to be a permament fixture in the first team when he was still evidently not ready. His performance at Blackburn seemed to be the tonic for this; after being introduced for Dembele after thirty minutes the sub was subbed. It was to be expected, and perhaps it was for the best that opinions of Frei were tempered and pressure on him was relieved, for a while at least. As for the teenager, there was no doubt his flying form had diminished somewhat but in the last couple of weeks he turned that totally around with two starts against two of the biggest teams in the league. He started away at United, a game in which he played 67 minutes and did himself no harm at all, before following it up with his third start of the season against Chelsea. And what a display he put on in that derby. Ivanovic is no mug but Frei forced him into a good impression of one with a performance which demonstrated his skill, his acceleration, his close control and his intelligent running. He picked up his second bottle of Man of the Match champagne, despite being barely old enough to drink it.

And that is where the story of Frei leaves us. Apologies for the length of that; I only meant to do a summation but his rise to prominence is quite remarkable. There is a genuine belief among fans that we have a special, unique talent at the club, and we must be grateful that we have Frei contracted until 2015 considering Smalling was bought for 12 million, a teenager with the same ‘X’ factor but even weaker credentials! It is a view that is without doubt matched by Jol, and it’s quite striking how much trust the manager has in him. Frei hasn’t started many league games but when he has they’ve tended to be big games, United away and both Chelsea matches in particular and the hug between player and manager following his first goal against Odense was genuinely quite heartwarming. Moreover, Jol has used him in and Frei has demonstrated an impressive capability to create momentum for the team by coming off the bench, the red card of Djourou (Wenger post match claimed it was unfair to send Frei on to match up to Djourou, already on a yellow card) and the penalty award at Swansea in particular.

Frei laughed off comparisons with Messi earlier this season, but there is some merit to them in terms of playstyle. Frei has an exceptional burst of acceleration (although at full speed I don’t know how quick he is) but what’s also impressive is his ability to retain control of the ball as he runs. His close control too is very impressive, and has the flair and imagination to match his quick feet.

His defensive work has to be improved upon and probably needs a bit of focus, because he can let his full back free quite alot and Riise does not enjoy two-on-one situations. I don’t think he’s lazy necessarily, it’s just totally against his game, but to realise his talent he needs to be committed in every aspect of his game. The nice thing about Frei is that he seems down to earth and determined enough to take criticism and use constructive comment to improve himself as a player. At the moment he is also very right footed and almost every time you can predict what he will do; he will pick the ball up on the touch line and try and beat his man inside. It is no bad skill and Riise flourishes with the space that creates, but he needs more versatility when running with the ball especially when it is the better option.

Messi, like Frei, has played most of his career on the ‘opposite wing’ i.e. on the wing opposite to his stronger foot (on the right and left respectively). And this brings me on to something which I find genuinely quite infuriating. People observe his pace and ability to beat a man and that, combined with the emergence of Kacaniklic as a traditional wide man who also occupies that left hand side, has persuaded people to clamour to see Frei as a right winger. But that does Frei a total disservice because, like Messi, there is more to his game than beating his man. Frei possesses great dribbling ability, no doubt about that, but what he also has is an impressive pass (not in terms of range though) and vision about him. The slide rule ball for Riise’s offside attempt at goal is an example of it, but the example that really sticks out was when I saw him in a reserve game earlier this season (not quite sure which one, but I wrote a report on it), and he picked the ball up fairly deep, but he kept driving at goal. There were runners with but he kept running with the ball, before finally releasing it at the perfect time with the perfect weight, and I can’t quite remember what happened next but that’s fairly irrelevant because that moment demonstrated a maturity and decision making, a sophistication even, which in tandem with his technical ability really made me think ‘wow, this guy is good’. His movement is dynamic too, even going as far as offering a threat in behind defences in the middle of the pitch. This all comes about because on the left (or through the middle, I’ve seen him play there too for the reserves and the first team) he can use his stronger right foot, which gives him the confidence and technique to pull these other facets of his game off. Besides, he isn’t a particuarly great striker of the ball with his right foot anyway so I’m not sure how effective his crosses would be, although as I say he does need to develop his left foot and begin to turn both ways.

Frei has now set the standard and opened the door for this talented generation of Fulham youngsters to become Premier League players. His impressive rise to the first team is matched by the ability he has, and while he will hit the obstacles that all young players invariably do whether it’s loss of form, injury or some other type of malaise Frei appears to have a grounded mentality which will enable him to come through any downfalls stronger than when he entered them, which is encouraging enough to fairly anticipate a realisation of his potential. If he continues this rate of progress who knows, maybe he’ll follow a similar path to fellow winger Alexis Sanchez and line up alongside Messi – but I’m sure we’ll be hoping that he lines up opposite Messi one day instead. For now however, there is no better place Frei can be than at Fulham Football Club, and should Dembele or Dempsey decide to move on in the summer our wounds might not be so deep safe in the knowledge we have another potential star in the making.