Ref Has Final Say As United Edge Past Fulham 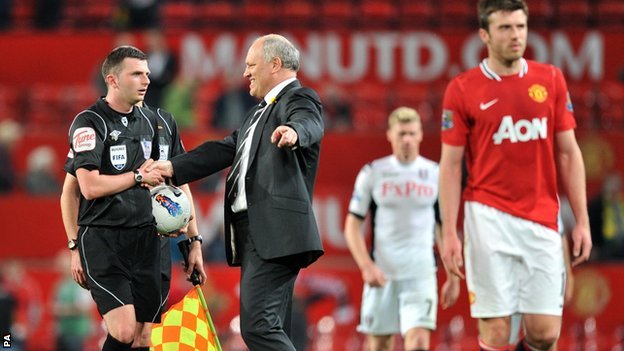 Manchester United open up a three point lead at the top of the Premier League at the expense of a resilient Fulham side in controversial circumstances. The away side was unfortunate to be a goal down by the break, Rooney capitalising on some poor defending late on in the fourty five, but towards the end of a second half in which United were largely the superior team the ref was nonplussed when Carrick appeared to bring down Murphy in the box.

United started the match off with real intensity, motivated by the opportunity to put some crucial daylight between themselves and their fellow title challenges, as they dominated the first 15 minutes. Despite this pressure however they struggled to open up a well drilled Fulham defence, Giggs with the only half-chance when he headed straight at Schwarzer, and what looked like would be a very long evening for the Whites turned into a half of poise and discipline.

Key to Fulham imposing themselves on the game were the midfield trio of Dembele, Dempsey and Diarra, who after a shaky start started to show their quality. United struggled to deal with the numerical advantage in the middle, both trying to pass through them and trying to take the ball back, and De Gea was forced into a couple of smart saves from Dempsey. Neither side could carve open an opportunity however, until a goal that Fulham will believe could have been so easily avoided. Hughes came across to fantastically cut out a United pass where it threatened to create an opportunity for Young. Dempsey emphatically cleared the resultant corner, but the ball was returned into the box and both Hangeland and Schwarzer missed the ball, putting off Riise who failed to anticipate and as such couldn’t sort his feet out for a clearance. Evans did well to cut the ball back to Rooney who had the simple task of stroking the ball into an empty net.

The majority of the second half played out much like the beginning of the much; United dominated with the ball and Fulham played frustratingly deep and struggled to gather any sort of momentum. Man of the Match Valencia could have doubled their lead within the first few minutes, latching on to a glorious Giggs ball but could only volley straight at Schwarzer when through on goal. Young was the next one to test the big Aussie with a curling shot directed towards the far post but Schwarzer was equal to his effort, diving to his left to tip it away. Jol sent Ruiz on for Frei to provide the struggling Pogrebnyak with some offensive support but the Young-Schwarzer duel didn’t take long to resume. The England winger connected sweetly with a deep cross, an effort that Schwarzer could only parry. Young ran onto the loose ball but the keeper did wonderfully well to anticipate and close down the second phase effort. The ball made its way to Giggs who’s shot was directed at the vacant goal but Hangeland positioned himself perfectly to block on the line.

As the game entered the 90th minute it looked like being settled by the single goal with neither side really threatening despite some fair pressure from the losing side, but Fulham were denied the opportunity to equalise when Danny Murphy burst into the box and looked to be clearly clipped by Carrick, but the referee was uninterested in the ex-Liverpool man’s appeals and waved play on to let United cling on for a fortunate victory.