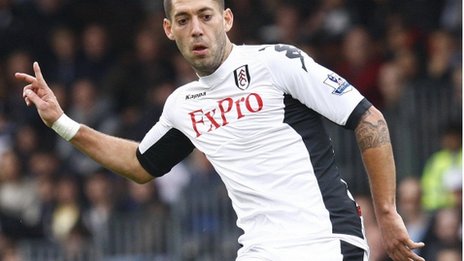 Clint Dempsey was delighted to help Fulham back to winning ways as his nineteenth goal of the season – the best tally by an American in English football – set the Whites on course for their first victory in four games against Norwich this afternoon.

The Texan reacted quickest when John Ruddy failed to hold Bryan Ruiz’s brilliant effort, bundling home Fulham’s first goal in more than four and a half hours after just 107 seconds at Craven Cottage. Dempsey, who has been offered a new contract by the club according to reports in this morning’s papers, was ecstatic with the win.

It was good to get back to winning ways. It was an ideal start scoring so quickly and then adding a second after 13 minutes. Being two nil up that early you think you can finish the game off strong but we couldn’t find that third goal.

When you’re two-nil ahead and you concede one it’s always going to be a bit scary and credit to Norwich, they came out in the second half and fought hald and played some really good football. We weren’t able to get going like we did in the first half.

We had our backs against the walls but we showed character and were able to get the result we wanted. We’re happy with the result and hopefully we can build on it.

Dempsey now believes Fulham can challenge for a place in the top half at least come May.