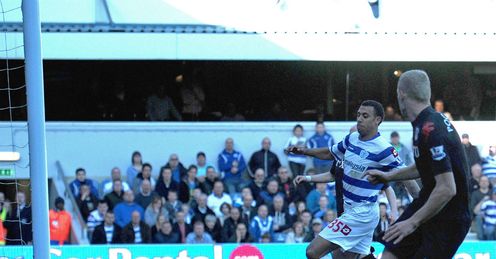 A selection of excerpts from the Sunday papers …

Glenn Moore, Independent on Sunday: ‘Hughes’s old team look far superior to his current one. Fulham took control and scored, Moussa Dembélé’s flick releasing Pogrebnyak behind Anton Ferdinand and the Russian loanee scored with a composure that belied a record of one goal in 14 Bundesliga games for parent club Stuttgart this season.’

Brian Glanville, Sunday Times (£): ‘The jeering choruses from the triumphant Fulham fans of “we’re better than you” were muted by the end. For much of the first half, Fulham were indeed far better than an incoherent QPR.’

Russell Kempson, The Observer: ‘Mark Hughes left Craven Cottage last June, in his own phrase, to move on and further his experiences. Presumably, that did not include experiencing defeat by his former club Fulham at Loftus Road and amassing a distinctly average record of one win in six Premier League matches since succeeding Neil Warnock as manager of Queens Park Rangers six weeks ago.

Paul Jiggins, The Sun on Sunday: ‘While Zamora was ineffective and sluggish, Pogrebnyak showed the Rangers defence he is not only a mouthful, he is a handful as well. He gave Fulham the presence in attack that QPR were expecting from Zamora. But there is more to Poggy’s game than his willingness to mix it — as he showed when he produced a piece of quality finishing to score the winning goal after just seven minutes.’

Steve Sammers, Sunday Mirror: ‘If Mark Hughes had any doubts about the massive task he faces at Loftus Road, then they were erased yesterday. Rangers were out-manoeuvred by Martin Jol’s Fulham, who looked far more composed and Pavel Pogrebnyak’s second goal for the club gave them a deserved win.’