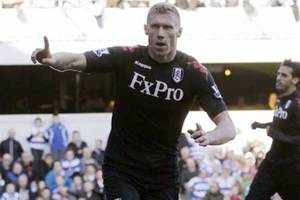 It wasn’t as routine as the late summer stroll at Craven Cottage, but then it was never likely to be. Fulham scored just a solitary goal this afternoon as opposed to the six that put past Paddy Kenny back in September but Pavel Pogrebnyak’s second goal as many as games since signing from Stuttgart proved enough to seal a double over QPR.

The Loftus Road fixture, notable for the first time that both Mark Hughes and Bobby Zamora had faced Fulham since joining Rangers, was settled by Pogrebnyak’s clever finish just seven minutes in. Fulham already seen Andy Johnson’s early header ruled out for offside before the Russian did open the scoring. Both efforts came from flowing midfield moves with the impressive Moussa Dembele at their core. The Belgian, signed by Hughes last summer, turned back towards goal after receiving a pass from Bryan Ruiz and played a delicious back-heeled pass between the QPR centre backs to release Pogrebnyak, who was composure personified as he rounded Kenny and rolled the ball into the net before gleefully celebrating with some of the 3,000 Fulham fans at the School End.

In truth, Fulham should have wrapped up the contest by the break. Rangers’ task got even tougher midway through the first period when Samba Diakite was dismissed for his second wild lunge in quick succession. The Mali midfielder, just back from the African Cup of Nations, had already launched himself recklessly at Dembele before he dived in Bryan Ruiz right in front of the referee. Phil Dowd had little option but to produce a second yellow. It was hardly the kind of impression Diakite would have wanted to make on his debut.

Hughes was indebted to Kenny for keeping the deficit at just one. The Rangers goalkeeper dived gratefully onto a low Pogrebnyak cross with Clint Dempsey, who had already fired narrowly wide from the angle, waiting to double Fulham’s lead. Kenny also palmed away a stinging Danny Murphy drive from a corner as the visitors pressed home their numerical advantage. By contrast, Mark Schwarzer was only seriously troubled once in the first period – and QPR should have equalised. The Australian veteran only managed to parry a low shot from Shaun Wright-Phillips but got his hands to Zamora’s follow-up before Taarabt ballooned the rebound over the bar. As if to save the Moroccan’s blushes, the assistant referee raised his flag for offside.

Zamora’s physical threat was well marshalled by the excellent Brede Hangeland at the heart of the Fulham defence, although Rangers were far more threatening in the second period. Having survived a bright Fulham start when only Nedum Onuoha’s saving tackle prevented Ruiz was running through on goal, they gradually managed to gain a foothold in midfield with Wright-Phillips moving in more central areas. Taarabt, who was largely restricted to long-range efforts in the first half, still looked the most likely to create an equaliser and his through ball released Jamie Mackie, who dragged his shot wide.

Jol brought on Dickson Etuhu and Chris Baird to protect Fulham’s slender advantage as time ticked on, but his side were fortunate to preserve their lead when Wright-Phillips spurned the game’s best chance seven minutes from time. The one-time England winger found himself clean through on goal as the Fulham defence was caught horribly square, but Schwarzer turn his measured finish aside. Dowd didn’t give a corner and Wright-Phillips looked skywards – unsure how he hadn’t managed to make of the opportunity.

Fulham had chances to settle the contest in injury time. First, Etuhu burst through the remnants of the Rangers midfield and carried the ball on into the penalty area before shooting agonisingly wide with the goal gaping and then Dembele turned Onouha, but the defender blocked his shot. It was by no means a classic – and became increasingly nailbiting as the clock ticked down towards full-time, but Jol will have been delighted with only a second away win of the season that puts Fulham within touching distance of the top half.