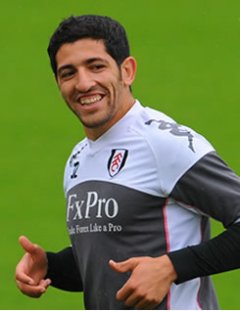 Martin Jol says Fulham would be happy to allow Rafik Halliche and Bjorn Helge Riise to leave the club before the end of the January transfer window.

Algerian centre back Halliche has struggled to make an impact with the first-team since signing from Benfica after an impressive World Cup in 2010. The 25 year-old hasn’t featured during Jol’s time at the club and has only made two appearances for the Whites, both as a substitute. Halliche was close to joining Swansea on loan in the summer transfer window but the necessary paperwork wasn’t completed in time and a proposed move to Celtic after a pre-Christmas trial appears to have fallen through.

With Halliche, he is probably our fifth centre-back so he is in a difficult position. I feel for him because he played for the reserves when we beat Arsenal and played a terrific match.

He is a good player, but I can’t play five centre-backs. If there is a good opportunity for him, I would like to help him.

Jol also would offer the younger Riise a chance to find first-team football, although this is more likely to be on loan. The Norwegian midfielder had a brief spell with Portsmouth but returned to Motspur Park early after making only a couple of first-team appearances and the Fulham manager insists any potential takers for the 28 year-old would have to guarantee regular football.

Bjorn was at Portsmouth and came back so we have to wait and see. The boy needs to play but I have to find a good club for him that play in a certain style.

They have to guarantee or promise me that he will be a good part of the squad because otherwise he will stay here.