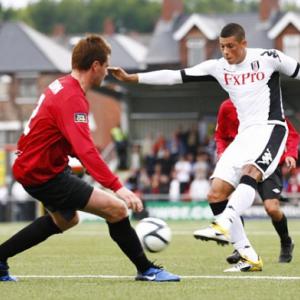 Martin Jol is poised to send Matthew Briggs out on loan next week.

The Fulham manager had to turn down approach from a Championship club, believed to be Bristol City, for the England under-21 international after the Whites needed urgent cover. Jol is keen for the left back to gain more first-team experience and, with John Arne Riise firmly established as Fulham’s first choice in his position, Briggs is unlikely to get that at Craven Cottage. The 20 year-old has made just two league appearances during this campaign and has not featured for the first team since their Europa League exit in December.

I stopped a loan last week because we needed him. I want him to go to another club to play and they were very happy to play him, but we had a situation where Chris Baird had a problem with his kid. But I still feel if there’s any opportunity for me to let Briggsy play somewhere, and there’s a lot of interest in him, I will think about it.

Briggs picked up a knock in Tuesday’s reserve team win over Arsenal and is expected to be loaned out before the end of the January transfer window. The left back, who became the youngest player in Premier League history when he made his debut at Middlesbrough in 2007, spent a month on loan at Leyton Orient in January 2010. He has played 19 games for Fulham, scoring his only goal for the club earlier this season against Crusaders.