Fulham ready to move for Rodallega 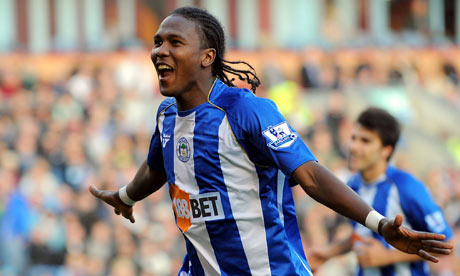 Martin Jol has made Wigan striker Hugo Rodallega his number one target for the January transfer window, according to Dave Kidd in the Sunday People.

Fulham have struggled for goals during Jol’s tenure – and with Andy Johnson no closer to signing a contract extension at Craven Cottage – a new striker is very much on the manager’s radar. Rodallega is out of contract at the DW Stadium in the summer and, whilst Wigan would usually be reluctant to sell one of their key players, the Latics may be forced to accept a cut-price fee rather than lose him for nothing in the summer.

The 26 year-old has scored 22 goals in 104 appearances since joining Wigan from Necaxa for £4.5m in December 2008, but the Colombian international has failed to find the net this season.