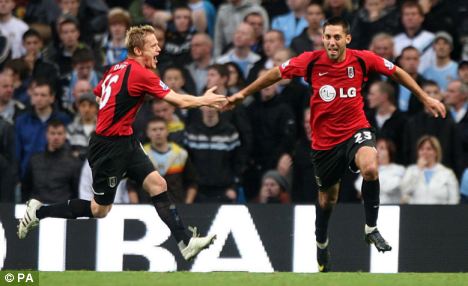 Which Fulham players will make your team?

It’s a week before the start of the new season. The anticipation’s rising, the excitement building, and you are looking forward to seeing how Mark Hughes’ side shapes up in the Premier League. But did you perhaps think before Mohamed Al-Fayed turned to the Welshman that you might be able to fill the big void left by Roy Hodgson’s departure?

Here’s your chance to prove it. We’ve decided to run a HammyEnd.com fantasy football league this season but we’re a little short on managers. Why don’t you use the few hours you’ve got before today’s game to pit your wits against your fellow Fulham fans? It’s free to play so you’ve not really got any excuse. Just pick your team over at the Premier League’s fantasy football site and join our league by using the special code 351895-90044 when you pick which leagues you won’t to play it.

Don’t worry about finishing bottom of the pile, for as long as I can remember, that’s been my job. Let us know when you’ve joined via the comments box and perhaps we can make an update from the fantasy league a regular feature.