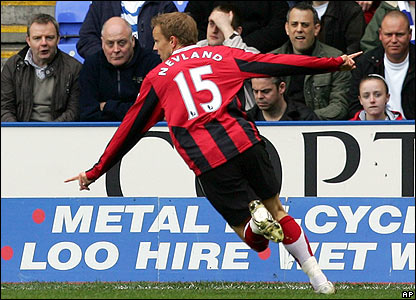 An interesting thread on the excellent Friends of Fulham messageboard (which if you haven’t visited, you really should – now!) today about the possibility of Erik Nevland leaving us in the summer.

People’s concerns seemed to have been sparked by a piece on the Times website this morning analysing the Premier League players who have been substituted the most and those who have been brought on most often. Erik is very near the top of the latter list. The inference from the article seems to be that some of these players might be looking for new clubs when the transfer window reopens at the end of the season. I don’t necessarily agree with that opinion as there will always be a role for the ‘super sub’.

I’d actually be quite surprised if Nevland left us this summer. While he’s not getting a great deal of first team football, he has said before that he’s happy to be a super sub and influence the game by coming off the bench. He might have slipped down the pecking order with Diomansy Kamara’s return from injury but I would imagine he’s still very much in Hodgson’s plans.

If I had a pound for every time I’d be asked why Erik doesn’t get more of a look in I’d be a very rich man. For me, there’s no great mystery. The answer’s fairly simple. I honestly don’t think Nevland can last the whole 90 minutes in the intensity of English football. Nick informs me that he very rarely played the whole game when he was in Scandinavia. The game against Swansea – where Erik was, to be brutally honest, pretty awful – rather proved that he’s not a plausible replacement for Zamora.

In fact, Hodgson has already pointed out that he sees Nevland as the understudy for Andy Johnson. There are, in fact, very similar players. They make clever runs, are fairly potent in front of goal and can be a nightmare to defend against. Nevland is obviously best deployed late on in a game against tiring defenders when the play is a lot more stretched. Remember how he burst through holes to score against Reading and Birmingham last season? Or how he changed the complexion of both games against Portsmouth this year? Contrast that with a very insipid display against Swansea and you’d find it pretty difficult to disagree with Roy’s position.

He certainly could have introduced Erik a little earlier at times, but I’d like to think the Norweigan will still have quite a part to play for Fulham next season.