Bully close to hitting his target 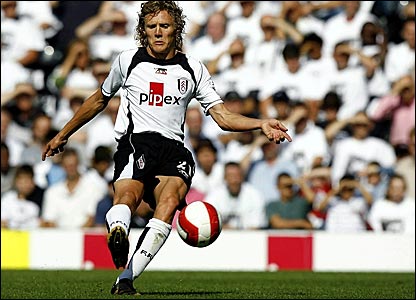 He’s better than that c*** Lampard,

Sky Sports are reporting that Jimmy Bullard is close to making a return to football by October. Even Nick should agree that’s the best news we’ve had for a while.

Bullard is something of a character both on and off the field. The shaggy-haired midfielder (perhaps a modern-day Darren Freeman) is widely acknowledged as the joker in the park at Fulham, but there’s no doubting his ability on the football field. Chris Coleman describes Bullard ‘as the best £2m I’ve ever spent’ and his spectacular impact during his brief spell in the team last season shows why.

Coleman apparently had to take Bullard to one side and implore him to take it easy during pre-season because he was sprinting around the pitch as though he was playing in the FA Cup Final. He has a terrific engine to ally with his wonderful array of passing and eye for goal. He has also has bottle. Nick and some of the FFC Sweden boys will remember how he stole the ball off Papa Bouba Diop to take the last-minute penalty that secured a point against Bolton on his home debut. Then he followed it up with a fine goal against Sheffield United (pictured above).

His injury – caused by a tackle from Scott Parker (then of Newcastle) – was untimely for two reasons. First, he gave Fulham the kind of midfield creativity we craved after the departure of Steed Malbranque. Secondly, Steve McClaren was reportedly considering calling Bullard into his England squad for the Euro 2008 qualifiers.

The question we’ve all been asking is whether Bullard will be quite the same player after his career-threatening knee injury. The likes of Alan Shearer and Michael Owen have had to change their game after long-term injury lay-offs, but in a sense it is easier for centre forwards, who can hide a lack of pace or play off the last defender. Bullard is rightly cautious about his return – saying that he’ll need a lot of reserve team games to bring himself back to ‘match fitness’ and suggests that the Christmas/New Year point is a likely date for him to target a first-team return.

“October still looks about right for me to be playing again but I will need a lot of training and a lot of reserve games to build up match-fitness for the first team. Match-fitness is the key. The knee is fine now and everything since I started rehab has been geared to when I could return from what was a career-threatening injury.”

“But although you may think you are fit, it is not until you see the other lads going into tackles and the pace they play at that you realise it is going to take time. By Christmas, I think I ought to be fully ready.”

The great thing is picturing Bullard playing a full part in the new-look Fulham midfield. Hameur Bouazza looks like being the long-term replacement for Luis Boa Morte on the left, Simon Davies has cemented a place on the right wing and whilst Stephen Davis and Alexei Smertin have forged a good understanding in the centre, everyone would be delighted to see Bully back.