Once again the team let us down. Not only do we have to come to terms with yet another cup exit versus a lower league team., we also have to face our friends and collegues who will give us stick and often try and get us to explain what really happened. This time I’ll refuse to try and find excuses and reasons, I’ll just ask them to contact Mr.Coleman or Mr.Kean.

According to some people Wycombe didn’t deserve to win considering how the game turned out, I say bollox, of course they deserved to win – given the motivation given to them by Chris Coleman by saying that any side Fulham would play should be good enough to beat them. Of course they deserved to win, they scored more goals than us and as far as I know there were no controversial refereeing involved. When you get a cup upset like this I think credit shall be given to the smaller team. I remember when we knocked out Aston Villa back in 1999, we got a lot of credit and to be fair we were a lot better than them in that game.

What we know, in hindsight, now is that: 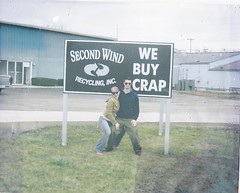 On the positive side (yes there is one!):

Congratulation Wycombe, now go on and have an excellent cup run! I’ll be keeping my fingers crossed that you manage to knock out a few more teams so our loss wont feel as bad.

Discuss the game in the forum!