Ayite happy for Fulham to float under the radar 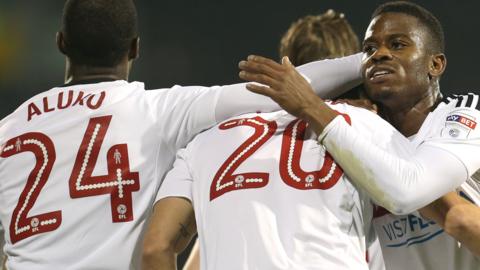 Floyd Ayite feels Fulham might benefit from sitting in mid-table at this stage of the season as they can float under the radar whilst building the momentum for a promotion push.

Slavisa Jokanovic’s side go into Saturday’s clash with Derby County in tenth place with the Championship’s top section very congested after a full programme of matches in midweek. Ayite’s goals have helped the Whites pick up four points in their last two games and he believes that being below the top six could count in Fulham’s favour at the moment.

Speaking to GetWestLondon after his third Fulham goal clinched a tense victory over bottom of the table Rotherham United, the Togolese international said:

You may be right that it is sometimes better to do the chasing rather than be chased. At the end of the day we are all professional footballers and it is up to us to manage the pressure really – that is our job whether you are just outside or in the playoff positions.

The winger felt he should have scored just before half time when a sensational piece of skill took him away from a Millers defender, but Lewis Prize blocked his shot.

We really pushed in the first half as we wanted to get a foothold in the game very quickly and I feel I slightly missed my chances. Fortunately, in the second half I was able to get the important goal.