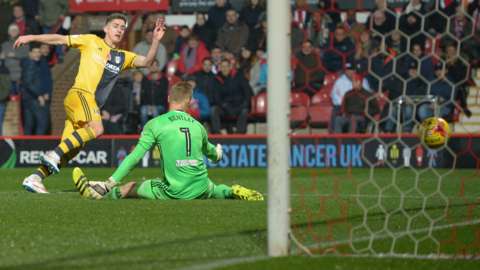 A stylish and dominant Fulham side cut Brentford down to size to secure local bragging rights at Griffin Park tonight and simultaneously sounded out a warning to the rest of the Championship about their promotion pedigree. This was a display to leave even the perfectionist in Slavisa Jokanovic purring as his previously inconsistent outfit outpassed, outplayed and out-thought their neighbours – themselves harbouring ambitions of a tilt at the top flight – during the first 45 minutes and had the composure to repel an improved Brentford side after the interval, before applying the killer touch in stoppage time through the talismanic Tom Cairney.

It was Sone Aluko, the Hounslow-born Nigerian forward, who stole the show for the second week. Aluko was outstanding in Saturday’s demolition of high-flying Huddersfield and picked up where he left off with a display full of pace, power and no little finesse. His scurrying runs, combined with the bewildering speed of Ryan Fredericks down the right flank, worried Brentford’s overworked full-backs, and Aluko was at the forefront of wave after wave of Fulham attacks. The only thing Aluko had lacked was composure in the penalty area, but when his moment arrived, persistence paid off.

Nine minutes before the break, Fulham weaved a pretty pattern in front of the Brentford defence. Lucas Piazon and Stefan Johansen prized open a space on the right side of the box before the Danish playmaker, who never stopped running throughout another fluent display, picked out Aluko on the edge of the box. The former Hull City forward’s first shot was thwarted by Daniel Bentley, but Aluko was clever enough to follow his effort in and bundled in the rebound to give Fulham a deserved lead.

In truth, Jokanovic’s side could have been out of sight by half time. Aluko was prominently involved at the end of Fulham’s most clear-cut openings. A deep cross from the impressive Scott Malone was headed back across goal by Chris Martin and Aluko’s low drive was on target but deflected wide. Bentley beat away a first-time effort from Johansen after he had been found by a crisp Cairney pass and Aluko would have felt he should have done better than curling wide from the edge of the box as well as when he struck the stanchion after a lightening break out from a Brentford corner was led by Malone before Cairney cleverly slipped in Aluko down the left.

Fulham’s most glaring miss came in first half stoppage time after Cairney had been brilliantly denied by another fine Bentley reaction save, only for Piazon to blaze the rebound horribly over the crossbar with Chris Martin standing seemingly in acres of space alongside him. Dean Smith would have been grateful to get his side, who offered not a single shot at goal in the first 45 minutes, to the interval just a single goal behind – and it was inevitable that the hosts would produce a better display in the second period.

They registered their first effort just a minute after the interval when Josh Clarke, who had been largely anonymous in the first half, blazed over from the edge of the box and former Chelsea midfielder Josh McEachran offered notice of Brentford’s increased ambition when he dragged a shot wide from distance. Fulham continued to create openings at the other end with Aluko glancing a Johansen cross wide and Martin having a shot bravely blocked at source, but they were almost caught out on the counter when, with yellow shirts committed well up the field, Clarke raced clear on goal and was only denied by a fine save from former Brentford keeper David Button.

Button, booed throughout by Brentford fans dismayed by his summer switch to Craven Cottage, thwarted Clarke again by getting his angles right to keep out another drive at the near post – but Fulham weathered Brentford’s most promising period in the game and almost added a second after some unselfish approach play from Martin released substitute Floyd Ayite, but the winger’s placed shot went right across the face of goal.

The visitors wrapped up the contest in the second minute of stoppage time – and the more convincing gloss on the scoreline was the very least they deserved. Martin slipped in Cairney with a perfectly paced return ball after Brentford wasted possession deep in the Fulham half and the Scottish midfielder kept his cool, feinting his way past the last man with a dummy as he cut inside, before beating Bentley from an acute angle and celebrating with over 1,000 delirious fans in the Brook Road Stand.