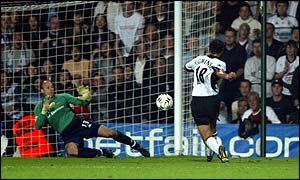 September 11 will always have a horrid resonance that makes the blood run cold and reverberates through the ages. My thoughts go out to those who lost loved ones, were injured or caught up on that horrible day. Against such a backdrop, sport is immaterial but it can, on occasions, provide a distraction from the awful elements of life. As it happens, a year after that dreadful day, Fulham served up one of my most special footballing moments.

I don’t have many fond memories of Loftus Road. Along with many other Fulham fans, I spent most of our exile in Shepherd’s Bush trying to leave QPR’s ground and return to Craven Cottage, where the club rightfully belongs. Our early period in W12 did bring with it some sparkling football as the Whites went about trying to prove that their first season in the top flight wasn’t a fluke – and they surprised all-comers with some scintillating displays helped by the early summer participation in the Intertoto Cup.

Tottenham came to west London a high. Their fans were serenading a side that had swept to the top of the league, managed by cult hero Glenn Hoddle, and they had just added Robbie Keane to their ranks. Whilst the Irishman waited patiently for his chance from the bench, Spurs strode past Fulham as easily as a knife through butter. For the first hour, it didn’t appear much like a contest at all. Dean Richards rose easily above Zat Knight to power home a corner and the evergreen Teddy Sheringham doubled the lead with a sharp finish after a slick move. At that point, it appeared a question of how many the visitors would score.

Fulham were creaking at the back, without the unfairly maligned organisational qualities of Andy Melville, and were severely depleted at the other end of the field as well, with both Louis Saha and Luis Boa Morte limping off through injury. Initially, it looked as though Jean Tigana’s side would struggle to make much of an impression in the second period as well – especially when Spurs were only denied a third by a linesman’s flag after Milenko Acimovic’s header was ruled out for offside. But Fulham refused to give up, typified by the drive and desire from a deep midfield role of Sean Davis, who was really beginning to impose himself on the top flight at this point.

It was Davis who brought a fine save out of Kasey Keller with a powerful shot from long range – and from nowhere belief surged through the Fulham contingent. Facundo Sava almost snuck a header past the American goalkeeper and only a last-ditch challenge from Ben Thatcher prevented Sylvain Legwinski from bringing Fulham back into the contest. Legwinski was always one of my favourite Fulham players. Not for his beard – or the brilliant ‘Monica’ nickname he received from his team-mates because one of them thought his surname sounded like that of the infamous White House intern – but for his combination of steel, style and passion at the heart of the Fulham midfield.

He was at the heart of a famous comeback here. It began with a sideways ball to Davis, whose shot cannoned off Chris Perry, and Junichi Inamoto – the hero of Fulham’s first European adventure – returned the ball into the far corner with interest. That gave Tigana’s side some hope and Steve Finnan, such a stupendously consistent performer at right back throughout his Fulham career, shaved the crossbar with his own drive. Suddenly, Spurs were rocking and the ‘home’ side were in the ascendancy.

Barry Hayles, who toiled manfully for much of the evening, was sent sprawling to the ground by Anthony Gardner. In hindsight, it is no surprise that Mark Halsey – he of the inexplicable decisions against Arsenal – didn’t point to the spot. But he had little choice but to award the penalty when his assistant was flagging and cool-as-you-like Steed Malbranque converted the spot kick with the modicum of fuss. There were still six minutes to play and there was only one side going for the win now. Spurs, so utterly dominant during the first half, reshuffled in an attempt to preserve parity, with Steffen Iversen shoved into midfield as a late substitute, but didn’t stop the surge of Fulham attacks.

There was a barrage of pressure down the Fulham right. First, Finnan and the then irrepressible Malbranque were denied by superb saves from Keller. The crowd roared their side forward for one last effort. Two Spurs supporters who had chanted their way through proceedings in the Ellerslie Road now seemed content enough with a point, shaking my hand, as they exited early. The deafening roar came only a minute or so later as Fulham capped a scarcely believable comeback.

Thatcher lost possession thirty yards from goal and Legwinski, all hustle and bustle, swooped upon the loose ball. He worked a one-two at pace with Sava, surged through the centre of a remarkably porous Tottenham defence, and as he went in the area to face Keller, the ground held its breath. Nobody needed to worry. The Frenchman beautifully lifted home the winner to spark frenzied celebrations. It remains one of those quite magical moments – even with all the time that has elapsed.