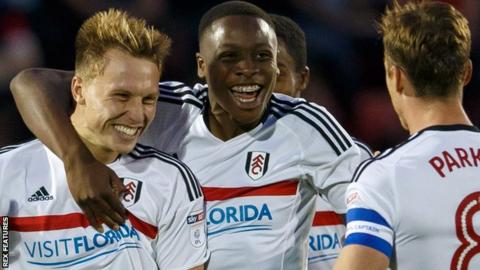 Slavisa Jokanovic shuffled his pack following Friday’s win over Newcastle and selected a youthful side that showed plenty of promising signs as they secured a safe passage into the second round of the EFL Cup at Leyton Orient tonight. There was a debut goal for teenage midfielder Dennis Adeniran and a brace of real quality for Cauley Woodrow but perhaps the most pleasing aspect of an encouraging evening was the character a young team showed in surviving a late scare, provoked by the arrival of substitute Paul McCallum whose two headed goals, cast doubt on what had looked a comfortable victory.

Jokanovic would have been irritated by the way in which old defensive frailties threatened to undermine a composed display. That two experienced centre halves in Richard Stearman and Tim Ream appeal unable to counter McCallum’s aerial dominance was disappointing and the manner of the two goals conceded was all too familiar. Having looked assured at set plays for much of the evening, McCallum got the run on Ryan Tunnicliffe to reach Dean Cox’s corner ahead of a hesitant Jesse Joronen and then the forward outjumped Sean Kavanagh to power home another perfect Cox cross after Tunnicliffe had squandered possession.

The helter-skelter nature of the closing stages sparked by Orient’s impressive fightback shouldn’t detract from the quality of some of Fulham’s earlier football. Many of Jokanovic’s young tyros were to the fore, especially Adineran, who hardly put a foot wrong in central midfield before he was forced off early by a robust challenge. His range of passing caught the eye but the England youth international wasn’t afraid to put in a tackle or two and capped an excellent first start with the opening goal, meeting a wonderful Kavanagh corner with a firm header, which he celebrated by rushing into a North stand full of delirious Fulham fans.

Many of Adeniran’s contemporaries from the youth team also enhanced their reputations with Luca de Torre, asked to link the play between midfield and Woodrow, full of energy and clever touches. Ryan Sessegnon’s first senior start matched the quality of his pre-season displays, with dangerous forays forward – exemplified by one that culminated in a dangerous cross from which Woodrow should have doubled Fulham’s lead – and a maturity beyond his years. Tayo Edun worked tirelessly down the left, but both were feeling the effects of a full-blooded Cup tie by the final stages.

Woodrow certainly made the most of his first opportunity to impress after Matt Smith’s fine start to the new campaign against Newcastle by scoring twice in three second half minutes. There looked to be little danger when Edun was brought to ground by Gavin Massey some thirty five yards from goal, but Scott Parker tapped the free-kick square to Woodrow, who drilled a powerful finish into the bottom right corner of the net, leaving goalkeeper Sam Sergeant grasping at air. His second was just as impressive, utilising his strength to brush off Aron Pollock by the corner flag, advancing into the box and finding the bottom corner again with an accurate finish from an acute angle.

Fulham visibly relaxed after Woodrow’s double, stroking the ball around imperiously and threatening to add to their lead. The tone of the contest changed once Andy Hessenthaler summoned Cox and McCallum from the home side’s bench – and the ease with which the returning centre forward headed home his first rattled the visitors. The O’s immediately went on the offensive and only a smart save from Joronen prevented Ollie Palmer from pulling another one back.

Once Cox and McCallum had combined for a second time there was a serious sense of foreboding amongst the travelling contingent, although Woodrow spurned a good opportunity to seal his hat-trick with five minutes to play after strong play from Kavanagh down the right. The home side continued to press for an equaliser deep into the three minutes of stoppage time but their clearest opening came right at the death when Cox improvised a volley that flew straight into Joronen’s grasp. Fulham might have made it difficult for themselves – but they are in the hat for round two.