Smith strikes to down Preston 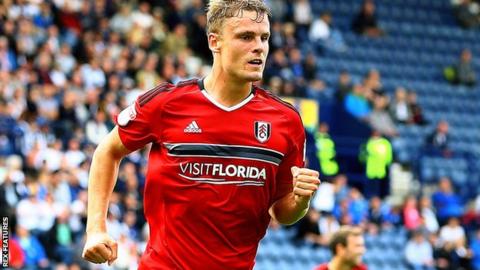 Slavisa Jokanovic might have stressed that he wanted to bolster his threadbare squad before the closure of the summer transfer window but the Fulham head coach must have been a contented man after watching his side secure a second straight league win in impressive fashion at Deepdale this afternoon. Goals from Sone Aluko and Matt Smith put the visitors firmly in control, but the character shown to thwart a late Preston revival after Callum Robinson’s far-post header was just as noteworthy as some of the earlier fluent football.

So fragile was Fulham’s defence last term that it is no exaggeration to suggest that they would have crumbled under the weight of Preston’s belated pressure. They still enjoyed a significant slice of luck when Jermaine Beckford’s header was ruled out for offside after Tom Clarke had nodded back across goal, with television replays suggesting that the former Leeds striker was right to feel aggrieved, but this was a much more composed and disciplined defensive performance than the ones that had so undermined Fulham’s previous Championship campaigns.

Building from the back has been a feature of Jokanovic’s pre-season and you could see the fruits of his labour here. Tomas Kalas and Michael Madl looked assured in central defence, screened superbly by the classy Kevin McDonald, whose diligent display allowed the silky skills of Tom Cairney to come to the fore. Cairney frightened North End with some direct running, typified by the way in which he carried the ball deep into Preston territory to create the decisive second goal for Smith. Making the most of his undoubted quality will be crucial for Fulham this season.

After a rather cagey opening, the game opened up with opportunities at either end. Eoin Doyle’s flicked header represented the first effort on target, although David Button easily fielded it from Paul Gallagher’s free kick. The addition of pace in the Fulham forward line has brought a real threat on the break and both Scott Malone and Sone Aluko found promising positions down the left only for the final ball to go awry.

Aluko, though, showed a real poacher’s instinct to put Fulham in front on 33 minutes. Preston struggled to deal with a corner, with Alan Browne’s clearance ballooning up off McDonald and dropping inside the six-yard box, where Aluko reacted quickest to nod home his first Fulham goal from just four yards. The visitors thought they had doubled their lead just before the break, but Smith was harshly penalised for tussling with Clarke as he climbed to power home another Cairney corner.

Preston upped the ante in the second period as the game became a more physical and bitty affair. They were denied an equaliser by an offside flag as Doyle had drifted beyond the Fulham defence before guiding home a cross from Browne, but the hosts’ play had far more urgency about it, with McDonald at full stretch to bravely block a Joe Garner drive. Fulham still threatened on the break with Lindegaard making a splendid reaction save at the feet of Floyd Ayite after Malone had fed him with a clever pass.

The Londoners increased their lead midway through the second period with a goal that owed much to Cairney’s ambition. The midfielder surged onto a Scott Parker pass and dribbled away from three Preston defenders at pace before sliding an inviting ball into Smith’s feet. Lindegaard did well to parry his first shot, but Smith made no mistake with the rebound to double Fulham’s lead.

Any sense that Fulham might enjoy a stroll in the Lancashire sunshine was extinguished just four minutes later when two of Grayson’s substitutes combined to haul Preston back into the contest. Beckford tricked his way beyond Malone and delivered a delightful cross to the back post where Robinson, who had replaced former Fulham winger Ben Pringle, buried a brilliant diving header. While Preston pushed for an equaliser, the game was open enough for Fulham to nearly put it beyond their reach – with Parker’s shot pushed away by Lindegaard after fine approach play from Aluko. Fulham saw out four minutes of added time and thoughts now turn to another testing away trip – this time at Leeds on Tuesday night.