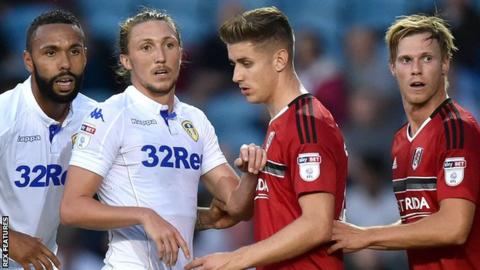 Tomas Kalas admitted he was at fault for Chris Wood’s injury-time equaliser at Leeds which cost Fulham their 100 per cent start to the season – and has targeted a victory against Cardiff City tomorrow to take the team’s points tally into double victory.

The Czech defender, who has been so impressive since his loan move from Chelsea, felt he should have done better in closing down Wood in the box before the New Zealand striker’s overhead kick cancelled out Tom Cairney’s sublime opener on Tuesday night. Kalas told Fulham’s official website that the players were bitterly disappointed not to have seen out the match:

I think I should have done better in the last situation. He probably would’ve knocked my head off but it wouldn’t have been a goal, At the end it felt like losing, but it’s still one point from an away game. Before the game we wouldn’t complain but when we saw how the game went, disappointment is the right word because we were much better and we should have won.

Hopefully we will get another three points as soon as possible, on Saturday [against Cardiff], and then 10 points out of 12 will be all right.

Kalas feels the changes to Fulham’s approach implemented during pre-season training by Slavisa Jokanovic are beginning to bear fruit and is confident that the team can continue their strong early season form.

We’re trying to play football which is slightly different compared to most of the teams in the Championship in the last few seasons. Even when the situation doesn’t require playing football on the floor, we’re trying to find a way out in a football way.

Cardiff have got a few quite fast, agile players so they will try to move our defence out of our compact shape. But we shouldn’t look too much at the opponent – if we play our style of football we can always compete with everyone.