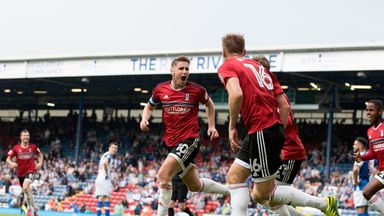 It just had to be Tom Cairney. If one player has symbolised the Venky’s firesale at Blackburn Rovers and the continuing unhappiness of the Ewood Park faithful at their owners, it would be the classy midfielder who returned to Lancashire – a year after his departure for what still seems like a pittance – and curled in a stoppage time winner to break home hearts. It appeared as though Slavisa Jokanovic’s side would be frustrated for a third game in succession having dominated possession for most of the afternoon, but Cairney popped up in the nick of time to drive home a winner after Ryan Sessegnon’s cross had only been half cleared.

The late drama preserved Fulham’s unbeaten start to the season and lifted the Whites to second in the early Championship standings. Cairney had endured a quiet afternoon until his late intervention, largely on the periphery of Fulham midfield that was enlivened by the presence of new signing Neeskens Kebano, who proved an energetic replacement for the injured Floyd Ayite. Kebano carried the greatest threat and came the closest to breaking the deadlock during the first half – with a rasping 25-yard drive that was batted away by Jason Steele – but Fulham looked toothless up front, even when Cauley Woodrow replaced Matt Smith for the final quarter of the contest.

Blackburn, who looked every inch the side scrapping for survival just six games into the season, were well organised and compact and had tested Fulham’s defence in the early stages. Danny Graham, a thorn in Fulham’s side on their last visit to Ewood Park, almost delivered the perfect start when he latched onto a delightful through ball from Ben Marshall and checked inside Michael Madl, but he lifted his shot over David Button’s crossbar. Madl was on hand shortly afterwards to nod away Sam Gallagher’s cross inside the six-yard box after the goalkeeper and his centre halves left matters to each other and then Scott Parker slide in to prevent Hope Akpan from opening the scoring.

Fulham saw most of the ball but had little to represent their obvious dominance. Button produced a brilliant save at the start of the second half tipping the impressive Craig Conway’s shot around the post, but Fulham gradually pushed Rovers back as the contest wore on. Dennis Odoi’s floated pass released Cairney down the right and the Scottish midfielder drifted past his man but curled a trademark effort over the angle of post and bar. Rovers threatened sporadically – with substitute Darren Lenihan driving wide from long range and Button pushed away a sharp shot from Anthony Stokes – but as the game entered added time, with Jokanovic having thrown on Jozabed and Woodrow in search of a winner, Fulham looked the most likely to break the deadlock.

Referee Scott Duncan, who had a curious game even by Championship standards, waved away strong penalty appeals when Woodrow was wrestled to the ground inside the area by Gordon Greer, but Fulham kept probing and eventually got their reward in the fourth minute of stoppage time. A set play was cleared towards the halfway where the quick thinking of the advancing Button returned the ball with interest and Fulham patiently worked the opening between Kevin McDonald, Cairney and Sessegnon. The teenage full-back had surged forward down the left all afternoon and although his low cross was cut out by Gordon Greer, Cairney arrived to punish the weak clearance by curling a fabulous finish into the far corner.

The joyous celebrations at the corner flag in front of more than 500 travelling fans emphasised the joy at turning a tight game into a victory – and also at extending Fulham’s flawless start to the new campaign. Jokanovic has been relentless in his insistence that nothing is won in August, but just quietly you might be able to whisper that he is building a side capable of challenging at the right end of the Championship.