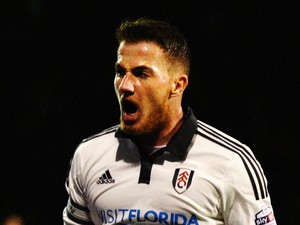 A report in this morning’s Daily Mail claims that Sheffield Wednesday are preparing a £12m bid for Fulham striker Ross McCormack.

The paper suggests that the Scottish international was ‘left frustrated’ by not being able to join Middlesbrough during the January transfer window. McCormack subsequently signed a contract extension to keep him at Craven Cottage until 2018 – although there has been frenzied press speculation that the new deal includes a release clause that would allow him to talk to interested parties.

Fulham would fiercely resist McCormack’s departure after the forward scored 23 goals last season and his regular partner up front Moussa Dembele is set to leave when his contract expires at the end of this month. The Mail say that Wednesday boss Carlos Carvahal sees McCormack as the type of player to boost his attacking options following their play-off final heartbreak, although the 29 year-old was quoted last week emphasising his desire to play in the Premier League at some point.