Fulham set for talks with Stokes 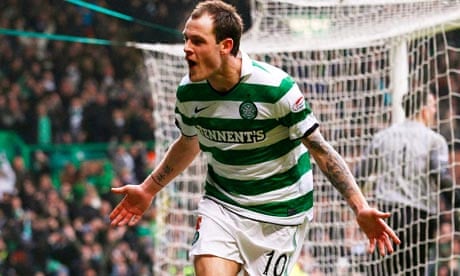 Fulham are one of a host of Championship clubs poised to begin talks with former Celtic striker Anthony Stokes over a permanent move this weekend.

The 27 year-old forward was released by the Scottish giants this week after spending last season on loan with Hibernian, whom he helped to Scottish Cup success. Speculation north of the border has suggested that the former Arsenal trainee could be tempted into returning to his old club, although much depends on whether new Hibs boss Neil Lennon sees Stokes as the right option for his new employers. The Republic of Ireland international was a regular under Lennon at Parkhead, but fell out of favour under Ronny Deila.

Stokes, who scored 77 goals in 192 appearances for Celtic, has also been interesting Rotherham, Blackburn Rovers and Birmingham City. He has previous experience of gaining promotion from the Championship with Sunderland, whom he helped win the title, in 2006-07 and Fulham’s need for a new striker will be underscored by the potential departures of Moussa Dembele and Matt Smith in forthcoming weeks.

Rotherham’s new manager Alan Stubbs, who managed Stokes at Hibs, has highlighted his interest in rekindling that successful relationship:

I wouldn’t rule out an interest in Anthony Stokes. But we wouldn’t be on our own. There will be a number of clubs interested him, particularly if it’s a free transfer. I know him from his time at Hibs and at Celtic. Obviously, it doesn’t hurt that I have a good relationship with him already.