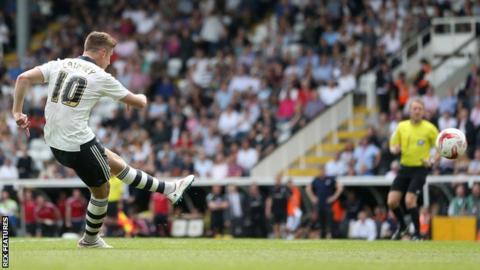 Following the forgettable derby capitulation at Griffin Park, Slavisa Jokanovic urged his players to finish the season with a flourish against already-relegation Bolton Wanderers. There wasn’t as much style and panache as the Serbian might have demanded, but a sumptuous second-half strike from Tom Cairney secured all three points for Fulham on a sun-kissed afternoon at Craven Cottage, and the head coach demonstrated his sense of humour by proclaiming a rare clean sheet as ‘extraordinary for us’.

Cairney’s majestic winner – curled in from the edge of the box in trademark fashion and with a modicum of fuss – capped an energetic performance that illustrated why Fulham were so pleased to prize him away from Ewood Park last summer. His influence might be reduced as one of wide midfielders in an orthodox 4-4-2, but Cairney might the most of the space afforded to him by an overworked Bolton defence. Ben Amos had already produced one splendid save to tip away a curler from distance in the first half and Cairney also bent one onto the roof of the net after a speedy counter-attack, so it was something of a surprise that he had to wait some 77 minutes before breaking the deadline. Amos had showed impressive reactions to keep out a Matt Smith header, but Cairney’s clever strike from the right angle of the area left the former Manchester United goalkeeper with no chance.

The home side should have been out of sight by then. Lawrie Wilson’s sliding block prevented Smith from opening the scoring inside the first minute as he attempted to guide home Ryan Frederick’s low cross and the visitors’ goal survived a real scramble from a corner shortly afterwards with Amos fisting away a Smith header, Ryan Tunnicliffe’s overhead kick blocked and a snapshot from Dan Burn being deflected wide. It was the towering centre half who came closest to breaking the deadlock when a barnstorming run from well inside his own half culminated in a 20-yard shot that bounced back off the far post.

Smith also spurned two glorious chances – one a free header at the far post from a Ross McCormack corner and the other a rushed shot when he was played through down the left – but Bolton created opportunities of their own. The talented Zach Clough almost found veteran striker Emile Heskey with a perfectly threaded through ball but Burn snuffed out the danger and former Wanderers defender Tim Ream was on hand to make an important block when Clough looked ready to test Marcus Bettinelli.

The pattern continued after the break, with Heskey coming close to snatching an opener for the visitors. Wilson was afforded far too much time to cross on the right and the former England international’s header looped just over the crossbar. Clough was becoming more influential, too, with Bettinelli being called in action to punch away a dangerous free-kick. Fulham should have gone in front shortly before the hour mark when a fine interchange between Cairney and McCormack led to a deep cross that the rising Smith headed wastefully wide.

Jokanovic turned to American under-21 international Emerson Hyndman to inject some life into proceedings – and if this was to be the Texan’s final outing in a Fulham shirt there were plenty of clever touches for the Craven Cottage crowd to remember. He couldn’t crown it with a goal – although that was down to more fine keeping from Amos who did superbly to keep out a venomous drive at his near post after Scott Parker had artfully scooped a ball over the Bolton rearguard – and the bravery of David Wheater, who put his head into harm’s away to block a powerful effort from distance.

Cairney’s wonderfully-taken winner was enough to lift Fulham to twentieth in the final Championship table, but the result won’t mask the massive rebuilding job necessary for a third successive summer. A host of players are out of contract in a month’s time and Jokanovic faces a herculean task in bringing in sufficient quality over the briefest of post-season breaks to sustain a genuine promotion tilt come August. The focus now switches from the pitch to the boardroom.