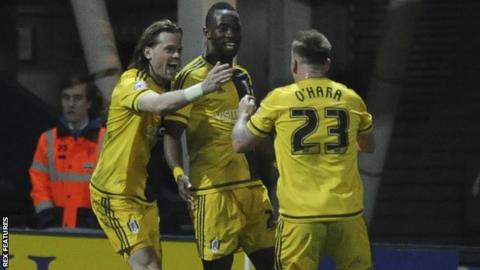 Back-to-back victories certainly make the Championship table look a lot more attractive. Moussa Dembele grabbed his second crucial winner in four days as Fulham fought to record their first set of consecutive wins since October at Preston tonight and established a seven point cushion between themselves and the relegation zone. This success was something of a smash and grab raid, especially as Simon Grayson’s side completely dominated the second half, but Slavisa Jokanovic won’t be complaining.

Dembele and Ross McCormack, who had combined so effectively to see off MK Dons on Saturday, have now scored 35 league goals between them this season and the Frenchman’s predatory winner, which came after he instinctively followed in McCormack’s free kick that had been turned onto the post, might be his most valuable one yet. If the teenage forward is set to wave goodbye to Craven Cottage on a Bosman in  the summer, he’s certainly leaving on a high note. It mattered little that he had been largely anonymous for the rest of the contest – after all, that’s the hallmark of a goalscorer.

Fulham might have expected something of a more comfortable evening after McCormack’s majestic breakaway goal had put them in front inside five minutes. A clearance from Tim Ream bounced kindly for the Scottish international, who skipped away from Tom Clarke and Bailey Wright before rounding Anders Lindegaard, and tucking the ball into the unguarded net. Yet, the visitors were already indebted to a splendid save from Marcus Bettinelli for keeping out a flicked header by Joe Garner, and Preston showed few signs of being discomforted by two early injuries to defenders Clarke and Calum Woods.

They continued a carry a real threat and Michael Madl had to be alert to hook away Jordan Hugill’s chip from just in front of his own goal after Bettinelli, who had thought he had been fouled, failed to claim a deep cross. The former England under-21 international was forced into action again shortly before the break when he managed to foil Garner at the far post and the ex-Nottingham Forest forward perhaps should have done better than send a header narrowly over the bar from Paul Gallagher’s corner in first half stoppage-time.

Jokanovic introduced Richard Stearman for Tim Ream as Fulham switched to three centre backs for the second period, but the game followed much the same pattern as at the end of the first half, save for Lindegaard producing an excellent save to keep out McCormack’s drive after some fine approach play from Scott Parker, who belied his 35 years with another tenacious display in central midfield, completing 180 minutes in the space of four days. The captain’s influence became all the more important when Tom Cairney limped off after injuring himself in a tackle.

Preston continued to press for an equaliser. Substitute Marnick Vermijl offered a warning about his own attacking ambitions when his 20-yard effort was deflected wide and Garner tested Bettinelli’s reflexes with a close rage header. Fulham were being pushed deeper and deeper towards their own goal and it was little surprise when Grayson’s side equalised, although Jokanovic will feel that Vermijl, well forward from right back, was allowed to cut inside both Ryan Tunnicliffe and Parker far too easily. The Belgian’s powerful low effort seemed to creep under a surprised Bettinelli from an acute angle – and the goal certainly galvanised the home side.

For a while, it appeared as though there would only be one winner. Former Manchester United midfielder Ben Pearson was posing all sorts of problems for Fulham and Preston threw on former Leeds striker Jermaine Beckford in search of a second, but just as the visitors were coming under sustained pressure a pacey break from Ryan Fredericks won a free kick towards the right angle of the box. It was comfortably within McCormack’s range, but Lindegaard splendidly turned the ball onto the post, and the defenders look favourite to reach the loose ball ahead of Dembele, who did brilliantly to hook it home.

The rest of the contest was one way traffic. Bettinelli produced a quite brilliant save to deny Beckford an equaliser almost immediately afterwards before Gallagher’s ambitious effort from distance flew wide and Beckford’s improverised flick at the death drifted just over the crossbar. Fulham hung on throughout nine nervous minutes of added time to claim a priceless victory – their first at Preston since 1998.