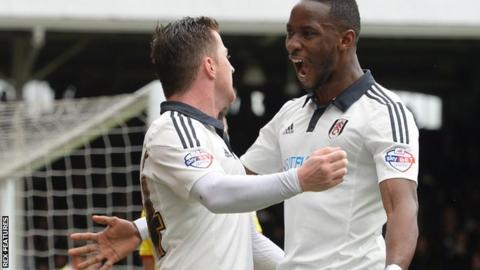 It was far from pretty, but Slavisa Jokanovic won’t care. Points rather than polished performances are the order of the day as Fulham languish worryingly close to the Championship trap door and a vital victory over Milton Keynes Dons meant the Whites now have a crucial four-point cushion over their closest relegation rivals. The deadliest strike partnership in the division – Ross McCormack and Moussa Dembele – combined for the goals that decided this nervy, but gripping contest and it is no exaggeration that without their key forwards, Fulham would already be preparing for life in League One.

Fulham’s first win since February was thoroughly deserved, but for all the quality of their football, the goals were a long time in coming. McCormack’s 22nd of the season arrived nine minutes after half time but owed everything to the persistence and unselfishness of Dembele. The French teenager, who has been linked with a surfeit of potential suitors across Europe again this week as he looks set to leave Craven Cottage when his contract expires in the summer, did superbly to reach a floated ball from Fernando Amorebieta and render goalkeeper Cody Cropper helpless with a low cross that left McCormack with the simple task of sliding the ball home from three yards.

Both McCormack and Dembele had chances moments later to extend Fulham’s lead but the pair were denied in quick succession by splendid reaction saves from Cropper and the MK Dons were soon back in the game as the home side’s defensive fragility came to the fore. There appeared little danger when Jake Forster-Caskey’s long ball bounced in front of both Amorebieta and Tim Ream but neither man managed to clear it, allowing Josh Murphy to nip in behind them and coolly lob the stranded Marcus Bettinelli.

The prospect of allowing another lead to slip, as Fulham did in their last home game against fellow strugglers Bristol City, suddenly reared its ugly head. It looked even likelier for a heart-stopping moment once Alex Revell had drifted in behind the Fulham back four to poke the ball past Bettinelli, but the travelling supporters’ joy was cut short by an offside flag. Fulham kept searching for a second and it arrived with fourteen minutes left. Ryan Fredericks, who added pace and verve down the right as a substitute, appeared to have overhit his cross, but McCormack’s perseverance kept things alive and his low cross picked out his strike partner. Dembele made no mistake – burying his low shot through the crowd and past a possibly unsighted Cropper to restore the home side’s advantage.

They clung to it doggedly despite belated MK Dons pressure as the visitors fashioned two chances at the death. First, Betttinelli appeared to get the merest of fingertips to Carl Barker’s goalbound free-kick, but referee Tim Robinson – who was far from impressive – failed to award to a corner. Then, in more than five minutes of angst-filled stoppage-time, Daniel Powell’s low shot took a wicked deflection and Bettinelli was able to smother the loose ball in a six-yard box packed full of yellow shirts.

The margin of victory was far narrower than Fulham’s first half dominance might have suggested. Tom Cairney had the game’s first chance after just thirty seconds, shooting wide from the edge of the box and Moussa Dembele wastefully shot over from eight yards after pouncing on a defensive mistake. Cropper made two terrific saves in the space of sixty seconds, first tipping over a dipping Cairney strike from distance and then denying Dembele with his feet at point blank range after the Frenchman had unleashed a low drive. The visitors threatened sporadically through Revell, but their best chance came from a Josh Murphy corner that the returning Joe Walsh headed wide.

Jokanovic refused to be carry away after the final whistle, insisting that this victory has done little more than offer some additional breathing space and turned his attention to Tuesday’s trip to Preston. His team selection today, with four central defenders and four central midfielders spread across the park, suggested that pragmatism has replaced artistry and that he expects his side to scrap. This wasn’t an attractive victory but any means, but nobody could fault the endeavour – or the importance of the result.