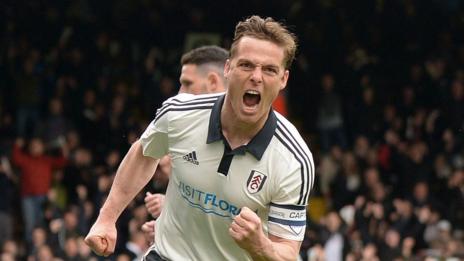 Scott Parker was delighted to score a crucial equaliser in Saturday’s vital victory over Cardiff City – but the Fulham captain was even more pleased that his side came from behind to beat the promotion contenders and move ten points clear of the Championship relegation zone.

The Fulham skipper struck a superb leveller just seconds into the second half that gave his side real momentum after a lacklustre first half performance. Parker admits that Fulham have been performing well below par in recent months but feels the three important victories over the past week have shown just what Slavisa Jokanovic’s side are capable of.

The 35 year-old says the dressing room, just like the famous old ground, was buzzing after Emerson Hyndman’s injury time winner.

There was an amazing atmosphere in the dressing room afterwards. We couldn’t have had a better week, nine points out of three games, maximum points, so we’re absolutely delighted. After a tricky first half where they really dominated and put us under a lot of pressure, to come out second half and do what we did was really pleasing.

I think we all knew at half-time that the intensity wasn’t there. We were playing a bit too deep and giving them too much time, so we decided to step up the field a bit more, 15 yards or so, make the pitch a bit smaller, and it worked well for us.

Everyone involved in the club, it’s for them really; fans, staff. We’ve obviously been in a bit of a mess over the last few months and that’s our responsibility as players. It’s not finished obviously but now, after the last week, everyone can take a little bit of a sigh.

The former West Ham and Tottenham midfielder took special pleasure in a rare goal that came from a move he started by winning an important header in central midfield.

I made a run and Moussa’s put a lovely ball in for me. I just watched it onto my foot and I couldn’t have hit it any better. As soon as it left my foot it was one of those that you knew was going in, so I was really pleased, really buzzing. They don’t come around often so I’ve got to savour those moments, especially at my age!

He was full of praise for the younger members of Fulham’s midfield, especially birthday boy Hyndman and the returning Lasse Vigen Christensen, who made a telling impact as a second half substitute.

Emmo played really well I thought. Everyone to a man played well. People like Lasse coming on with legs, he always looks a threat and obviously he did very well getting to the byline and pulling it back, and it was a lovely finish from Emmo.

Where we were just over a week ago going into the MK Dons game, it was tough for all of us. I think we’ve all realised what we’re capable of now, everyone to a man should realise that, and hopefully we can take good heart and good steps from this.

We can’t live on this, obviously. We’ll enjoy the moment but we’ve got another game coming up against Brighton so we’ll look to go again. We’re four unbeaten now so we’re going there in good form and hopefully we’ll get a good result.