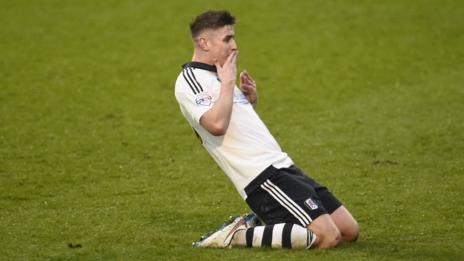 After the midweek horror show at Blackburn, this was more like it from Fulham. With the relegation zone still far too close for comfort, Slavisa Jokanovic – a man who wouldn’t want to cross on a dark night – demanded his players delivered a performance to prove that last weekend’s derby win at QPR wasn’t merely a flash in the pan, and the class of Tom Cairney shone through as the Whites eventually overpowered a spirited Charlton side to leave the Addicks looking horribly bereft at the bottom of the Championship.

On this evidence, Cairney looks a bargain at the summer price of just over £3m. The Scottish youth international, who made waves when he broke into the Hull City side as a teenager, has always been Fulham’s most eye-catching operator in a midfield that has spluttered rather than sparkled this season, but the way he ran the show from a central position, especially in the second half, makes you wonder how much success Kit Symons might have enjoyed had he made Cairney the fulcrum of his midfield from the outset. Two sumptuous finishes from set plays, either side of a fine Michael Madl header, condemned Charlton to another defeat, but they were well in the game for more than an hour and could count themselves highly unfortunate to be a goal down at half time, with the impressive Callum Harriott catching the eye.

The visitors were certainly not afraid to take the game to Fulham and carved out the game’s first chance in the ninth minute. Zakarya Birgdich carried the ball down the flank and his clever cut back created the space for a powerful shot from Harriott, who was denied by a smart reaction stop from Andy Lonergan. Former Charlton midfielder Scott Parker and then Ryan Fredericks were both forced into important blocks to keep out promising attacks and it was somewhat against the run of play when the Whites took the lead shortly after the half-hour mark.

A succession of corners come to little – bar Ross McCormack forcing a couple of regulation near post saves from Stephen Henderson – before McCormack’s near-post delivery caused some panic in the Charlton defence. Parker slammed a half-volley against the crossbar and Cairney reacted quickly to the rebound, guiding a fine right-footed effort into the top corner. Tall forward Simon Makienok had Charlton’s best chance to equalise but he turned a fine cross from Morgan Fox well wide at full stretch – and a swift Fulham counter-attack should have increased their lead just before the break.

A sweeping Fulham move saw Cairney find Kacaniklic who marauded with purpose down the right flank, teasing Fox before pulling the ball across for Cairney and his incisive pass found McCormack in space, but the Fulham top scorer lifted his finish high into the Putney End having drifted inside his defender.

Jokanovic admitted afterwards that he had made a mistake in ditching the successful 5-3-2 system for more of a midfield diamond and two eminently defensive half-time changes gave Fulham the sort of control they failed to establish in the first 45 minutes. Madl, so impressive on his debut at QPR replaced Kacaniklic, and Chris Baird made a welcome return to the Fulham midfield in place of Jamie O’Hara. The Northern Ireland international slotted into the centre of the park like he’d never been away, composed in possession, a reassuring defensive presence and the kind of vocal organiser Fulham have been lacking for far too long.

Charlton threatened right at the start of the second period when Harriott’s speculative strike from outside the box almost surprised Lonergan with its power, before Fulham replied with two rather tame efforts from Dembele, whose finishing didn’t ultimately match his desire to get past the Charlton defence. Just before the hour, the home side grabbed a crucial second when Madl stole in front of his marker to glance a McCormack corner beyond Henderson for Fulham’s first goal for a set-piece all season.

That calmed a few nerves and Fulham began to play with the kind of verve that suggests they should be far higher up the table. Dembele crashed a venomous strike against the crossbar and a neatly worked move between Cairney and McCormack ended with the former surging through on goal but dinking the ball over the grounded Henderson and the crossbar from five yards out. Charlton were still posing a threat themselves with former Fulham academy graduate Jóhann Berg Guðmundsson foiled by Lonergan, but the game was over as a contest a few moments later.

Charlton half-cleared a corner, but the ball dropped invitingly to that man Cairney, who met the dropping ball with a volley of the highest class from 20 yards that gave Henderson little chance. It might have been four under a minute later when Luke Garbutt, who turned in a much improved performance after his nightmare in Lancashire, sent in an inviting low cross that McCormack could only help wide to his obvious annoyance. There was time for Ryan Tunnicliffe to make a welcome return from a knee injury and demonstrate his desire almost immediately by picking up a yellow card for a robust challenge in the Charlton box and the visitors should have had at least one consolation after both Harriott and Makienok spurning glorious chances.