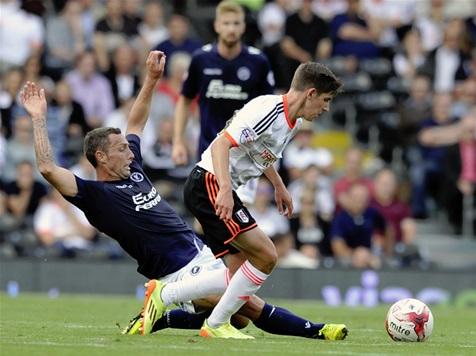 Emerson Hyndman was delighted to end Fulham’s run of nine games without a win against Rotherham United on Tuesday night – and is equally pleased to have got a first-team opportunity under caretaker head coach Stuart Gray.

The American international, who had previously told US-based journalists that he would be looking for a move away from Fulham once his contract expires in the summer, has enjoyed first-team football since the departure of Kit Symons and delivered a composed performance in a playmaking role from the centre of the park as the Whites moved a little further away from the relegation zone with a comfortable win in midweek.

We want to kick-start our season and we certainly did that. We are looking forward to working with the new coach and pushing on from the Rotherham match. I just look to perform well on the pitch and I think I had done okay to this point, but on Tuesday I think I stepped it up a little bit.

It feels great as I’ve worked very hard this year. To get this opportunity in the middle of the season is a fantastic feeling and I am just trying to get as many games as I can. I have been working hard all year in training and in the 21s. I try and get better every single day and when Stuart [Gray] came in he showed faith in me from the very beginning and it was very nice to feel that.

Hyndman credits club captain Scott Parker as a key figure in his own development – and the pair formed an impressive partnership of the midfield that gradually took control of the Rotherham game.

Obviously working with and then playing with Scotty is a huge help for me with all the experience that he has playing this game. He guides me around the pitch sometimes which is great. I have a lot to learn still but I was very happy with my performance. But most importantly the team played well which is the main thing.

The Texas-born midfielder is excited to work under new coach Slavisa Jokanovic, who paid a brief visit to the dressing room prior to Tuesday’s fixture, having been named as Symons’ successor on Sunday.

He came in and said he would only be 45 seconds long. He said good luck to all of us and that he wanted to see commitment and aggressiveness in the game. I think we did that from the first minute and we pegged them back with Cauley’s goal. We conceded the set-piece but despite this we were in complete control.

Hyndman is now targeting a perfect start to 2016 with a win over Sheffield Wednesday at the Cottage on Saturday – but nobody is taking the Owls’ challenge lightly.

We respect Sheffield Wednesday but it is all about us really. We have the quality to beat any team in the Championship. I think we can harness the feelings from the win the other night and kick on.