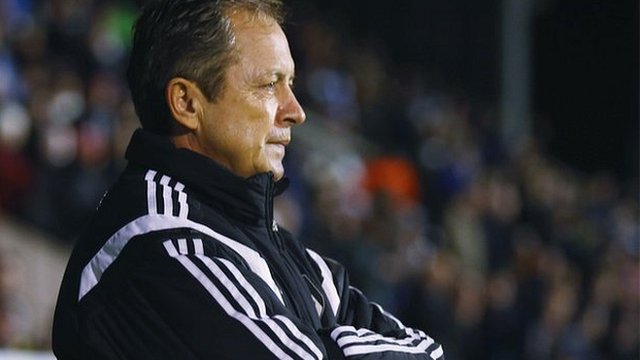 Stuart Gray was delighted to end his caretaker spell in charge of Fulham with a thumping win over Rotherham United at Craven Cottage – and plans to sit down with Slavisa Jokanovic to discuss his role under the club’s new head coach after training tomorrow.

The former Sheffield Wednesday manager, who has overseen Fulham’s last three matches, guided the Whites to a first win in ten games since the sacking of Kit Symons as Cauley Woodrow scored twice in a 4-1 win. He was delighted with the manner of the victory, which gives Fulham a six point cushion above the Championship relegation zone:

But our Achilles heel is from set pieces – and we conceded yet again. I wouldn’t say we lacked confidence; we lacked self belief. Our problem is getting the first goal and once we got that it made a difference.

Gray revealed that Jokanovic introduced himself to the players prior to the match and is keen to work with the former Watford manager in the days to come.

He came in and introduced himself and I had two minutes with him, and we’ll sit down tomorrow and talk as well. Any new manager in the stands is going to have an effect, but the harder you work the luckier you get.

I’m sure I’ll learn from him and him from me. He got Watford promoted, and I’ll pass on what I know about the Championship.

Gray told the post-match press conference that man-of-the-match Woodrow got his opportunity to start after Moussa Dembele, linked with a move away from Fulham in the forthcoming January window, injured a hamstring in training.

It’s only a minor thing and he (Dembele) just felt it tighten in training yesterday. One man’s loss is another man’s gain, and Cauley Woodrow came in and did excellently and took his two goals really well.