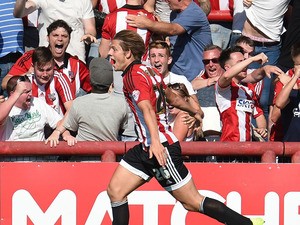 Fulham have renewed their efforts to sign Brentford centre back James Tarkowski by making a new offer this afternoon, according to media reports.

Brentford had already rejected a bid believed to be around £1.7m from their west London neighbours for Tarkowski earlier this summer, but time ticking away in the summer transfer window – and Kit Symons’ still seeing additional central defenders as a priority in the transfer market – Fulham have upped their offer for the 22 year-old.

The former Oldham Athletic defender, who is reportedly unsettled at Griffin Park after the departure of Mark Warburton during the close season, was a key figure as Brentford won promotion to League One and followed that up by reaching the play-off semi-finals in their first season in the Championship. He scored as the Bees came back from two goals down in injury time to draw their opening day fixture with Ipswich and Fulham, who have been in pursuit of Brighton defender Lewis Dunk for much of the summer, have now increased their offer to around the £3m mark.