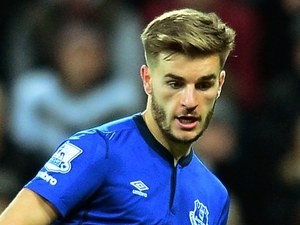 Fulham are one of four Championship clubs interested in loaning young Everton left back Luke Garbutt, according to reports this afternoon.

The Times claims that Roberto Martinez sees a move to a Championship side as ideal for the 22 year-old full-back as best for Garbutt’s development, despite interest from Swansea City and newly-promoted Bournemouth. The newspaper names Ipswich, Fulham, QPR and Rotherham as clubs who have already enquired about Garbutt’s availability after he played all three of England’s group games at this summer’s European Under 21 Championships in the Czech Republic.

Martinez is quoted by the Times as saying:

Luke is someone we want to keep in our club because he has a terrific future. He’s been playing for the England under 21’s and probably has the best left-back to learn from in Leighton, who he can get inspired by on a daily basis.

But what is important is that he is going to play. We are looking for playing time. Luke has to experiment from the game, and you do that by playing. If it’s in the Premier League it will have to be in an environment where he is playing. If not we will find a team that suits exactly what he needs in order to develop. He’s a phenomenal footballer. His technical ability is as good as it gets around Europe for his age, but he needs to be playing.

Kit Symons is known to be keen to sign a full-back to push Fulham academy graduate for a first team place after Kostas Stafylidis returned to Bayer Leverkusen following the expiry of his season-long loan. Kay Voser played at left back for much of Fulham’s first pre-season game against Villa, but Fulham have been linked with Manchester United youngster Reece James in recent weeks.

Garbutt signed a new five-year contract at Goodison Park earlier this summer having turned down the chance to discuss a potential move to city rivals Liverpool.