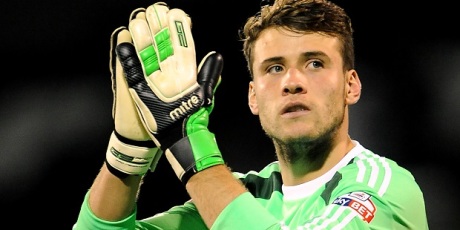 Chelsea have tabled a £2.5m bid for Fulham goalkeeper Marcus Bettinelli, according to a report in this morning’s Times.

Jose Mourinho has long been rumoured to be interested in the England under-21 goalkeeper, who broke into the Fulham first team last season and enjoyed an excellent debut season despite his side’s struggles in the Championship. Fulham are already believed to have turned down an initial approach from their west London neighbours, who also signed Asmir Begovic from Stoke this summer.

Bettinelli, who has a year to run on his current contract at Craven Cottage, has been at Fulham since the age of fourteen and has always been highly rated at Motspur Park. The 22 year-old saw his development hindered by a succession of serious injuries but eventually made his senior debut for the club during Fulham’s 1-0 win at Brentford in the League Cup in September. Bettinelli, who has now amassed more a hundred appearances in senior football, played 39 games for Fulham after ousting Gabor Kiraly once Symons replaced Felix Magath as manager and, having made his England under-21 debut against the Czech Republic in Prague in March, was included in Gareth Southgate’s squad for this summer’s European Championships.

Despite signing experienced goalkeeper Andy Lonergan on a free transfer from Bolton earlier this summer, Fulham would be extremely reluctant to lose another of their promising academy graduates so soon after the departure of Patrick Roberts.