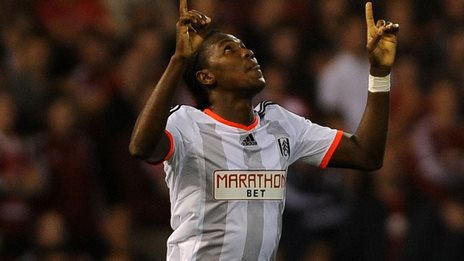 Fulham will assess Hugo Rodallega’s fitness this morning after the striker limped off in the closing stages of last night’s win over Charlton Athletic.

The Colombian forward settled the London derby with a clinical brace but pulled up with an injury just a matter of minutes after scoring his second and was replaced by teenage midfielder Patrick Roberts. The former Wigan striker has been troubled by a knee complaint and caretaker manager Kit Symons says the club’s medical staff will ascertain the extent of the problem with a view to deciding whether Rodallega will be fit to face Derby on Tuesday in the Capital One Cup.

He had a little knock that he’s been carrying. It’s nothing too bad. We’ll assess it in the morning.