One more win will seal Fulham job for Symons 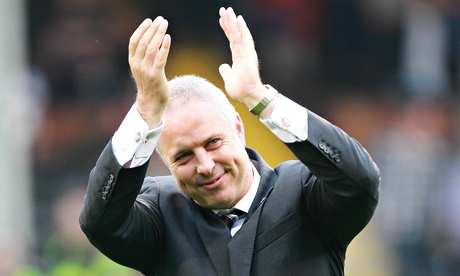 Kit Symons will be offered the Fulham’s manager job on a full-time basis if he can steer his side to victory over fellow strugglers Bolton Wanderers at Craven Cottage on Wednesday, according to the Daily Telegraph.

The paper reports that the current caretaker manager has the support of the key members of Fulham’s board after winning two of his first three matches in charge, including recording the club’s first win in a traumatic Championship campaign at Birmingham on Saturday. Shahid Khan could be close to calling off what he had previously described as a ‘thorough search’ for a replacement for the sacked Felix Magath as Symons’ has impressed club officials with the way he has boosted morale during his short time in charge.

Already having regarded at Motspur Park for his impressive work with the club’s Under 18 and Under 21 sides, Symons also has three years as a player – including two promotions – at Craven Cottage and was the fans’ favourite to take over from Magath, even prior to the German coach’s dismissal after the 5-3 defeat at Nottingham Forest. His closeness to the club’s Academy set-up is seen as crucial given Fulham’s current reliance on young players.

Although Fulham were beaten 1-0 at home by Blackburn Rovers in Symons’ first game in charge, the 43 year-old former centre back guided the Whites into the fourth round of the Capital One Cup with a win over Doncaster Rovers and inspired a comeback at St. Andrew’s on Saturday to lift the Londoners off the foot of the league table.