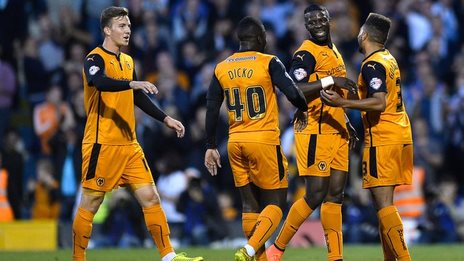 Fulham’s miserable return to the second tier of English football continued as Bakary Sako’s first-half strike condemned the Cottagers to second their second home defeat in four days and the Craven Cottage faithful voiced their discontent with Felix Magath.

The German’s brave new era – based around the club’s promising Academy products – certainly wasn’t expected to begin with three consecutive defeats. Magath showed more signs of not knowing his best eleven, making five changes from the side that lost to Millwall on Saturday, and Fulham’s display was much more error-strewn and jittery against a Wolves side that were well-drilled, disciplined and unlucky not to add to their victory. Magath did his best to preach patience in his post-match press conference but it remains to be seen how long chairman Shahid Khan, who watched this listless display from the directors’ box, will tolerate his side being so close to the bottom of the Championship table.

It took just a quarter of an hour for Wolves to break the deadlock and, in contrast to Saturday’s showing, Fulham seldom looked like overturning the deficit. The goal was an exercise in simplicity: Dave Edwards dummied a low Scott Golbourne corner and Bakary Sako, a transfer target for Martin Jol last season, swept the ball clinically into the bottom corner. It was not as if the warning signs hadn’t been there prior to the former French under-21 international’s effort – Edwards sent a shot right across the face of goal and Rajiv van La Parra almost beat Jesse Joronen to a through ball.

Fulham were flat and the plan to dominant possession by bringing in summer signing Mark Fotheringham alongside Scott Parker badly backfired. Fotheringham, released by Notts County at the end of last season, looked badly off the pace and was lucky to only receive a yellow card for a reckless late tackle. It was little surprise when he was sacrificed shortly after half-time. The home side’s only real moments of quality came through the threatening of Patrick Roberts, making his first full start for the club, but their first shot on target came only after Magath had introduced Moussa Dembele five minutes after the break, when Carl Ikeme got down to turn aside the Frenchman’s low shot.

Dembele’s arrival forced a tactical adjustment that seemed to stifle Fulham’s attacking rhythm, something that only suffered further when Hugo Rodallega was sent on for the last ten minutes as Magath searched in vain for an equaliser. His marquee signing, Ross McCormack, endured a frustrating evening and seemed to be playing on the left wing when he got his only real sight of goal, sending a snapshot fractionally over from the edge of the box. The Scottish international’s mood wasn’t improved when he picked up a knock when contesting a fierce challenge in midfield towards the end of the contest.

In truth, Wolves finished looking the much more likely to score. Matt Doherty was guilty of spurning a glorious chance when he headed Kevin McDonald’s inch-perfect cross over from close range and van La Parra turned debutant Sean Kavanagh inside out at left back before shooting into the side netting. As Fulham pushed forward, it was always likely that more gaps would open up at the back and, deep into injury time, Cameron Burgess brought down Nouha Dicko to concede a penalty. Joronen guessed right to push Sako’s spot-kick onto the post but there was no time for Fulham to create another meaningful chance.