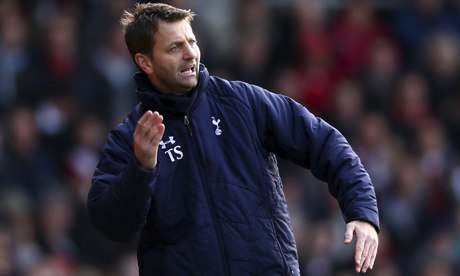 Fulham are giving serious consideration to replacing Felix Magath with Tim Sherwood, according to a report in today’s People.

The Whites are rooted to the bottom of the Championship without a point after Derby extended their dreadful start to the new season with a 5-1 thrashing at the iPro Stadium yesterday afternoon. Magath, only apppointed at Craven Cottage in February, has recently been given the backing of chairman Shahid Khan but the pressure on the German coach will only have increased following yesterday’s shambolic performance against one of the pre-season favourites for promotion.

Sherwood, who recently turned down the opportunity to take over from Tony Pulis at Crystal Palace, is currently looking for a new challenge after seeing his short-term spell in charge of Tottenham come to an end in May. According to the People report, Sherwood has made it clear he would be interested in restarting his managerial career at Craven Cottage as he is excited by the club’s potential and the extent of the talent coming through the club’s academy.

Other journalists have disclosed that Fulham are already in the process of sounding out potential successors to Magath with Championship experience. They are believed to keen to talk to former Chelsea manager Roberto Di Matteo and the ex-Norwich boss Chris Hughton. Both have recent experience of winning promotion from the division with West Brom and Newcastle United respectively. It remains to be seen whether Magath will be at the helm for Tuesday night’s London derby with Brentford in the League Cup.