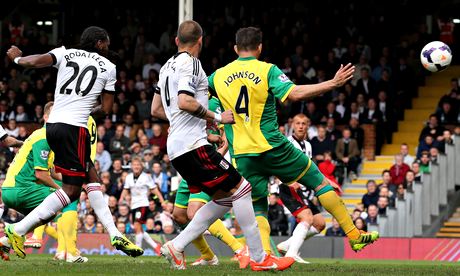 Hugo Rodallega’s post-match prayers might become a defining image of Fulham’s season. The man who was moved to tears by a Rene Meulensteen substitution in February has suddenly emerged as Fulham’s unlikely saviour as Felix Magath turned to the Colombian to rescue his stuttering survival bid. Rodallega, who starred in Wigan’s successful fight against relegation a few years ago, followed up his late header at Villa Park last week with a first-half winner against fellow strugglers Norwich, who could count themselves unfortunate to have left Craven Cottage without anything to show for their considerable effort.

This was only the second time in a torturous campaign that Fulham had strung together back-to-back wins and cut the gap between the sides separated by the relegation line to just two points with four games to go. New Norwich manager Neil Adams could point to his sides pressing and possession, but will be ruing the lack of quality in the final third that saw them unable to reply to Rodallega’s instinctive 40th minute finish when a free-kick from Lewis Holtby dropped at his feet.

Adams’ six changes to Chris Hughton’s last line-up galvanised a side that have looked like sacrificial lambs away from Carrow Road at times this season but the Canaries created the best chances in a tense – and yet remarkably open – affair. Ricky van Wolfswinkel’s return up front was largely forgettable, but the industry of Leroy Fer and the lively pace of Nathan Redmond represented a real threat to the league’s shakiest defence. Magath’s only change from the team that triumphed at Aston Villa saw Rodallega replace teenager Cauley Woodrow in attack – and it proved an inspired move.

Fulham might have managed the first chance of the game, but the miscued drive from Pajtim Kasami summed up an ultimately frustrating afternoon for the Swiss midfielder, who laboured lethargically down the right wing before Ashkan Dejagah arrived to add real impetus as the Iranian has done regularly off the bench in recent weeks. Where Fulham looked ponderous, Norwich were all action and ambitious. Redmond gave real threat behind the Fulham back-line and his powerful snapshot threatened to surprise David Stockdale at his near post, before Jonny Howson’s speculative strike was deflected wide.

Rodallega slipped at the vital moment before shooting wide of John Ruddy’s goal, but Fulham were indebted to two superb reaction saves from Stockdale and the crossbar for keeping them in the contest at half-time. First, Stockdale thrust out an instinctive hand to claw a van Wolfwinskel’s volley around the post and then pushed away a powerful Fer header from the resultant corner. Somehow Bradley Johnson dragged his rebound wide. Robert Snodgrass almost capitalised on a needless foul from Johnny Heitinga but his bending free-kick from 20 yards clipped the top of the crossbar.

Fulham could count themselves fortunate to have come through a prolonged period of Norwich pressure unscathed, but they were ahead before the break. A clumsy challenge from Steven Whittaker on Kieran Richardson allowed Holtby to measure an inswinger from the left-flank. The German’s metronomic delivery arrived perfectly for Rodallega after Steve Sidwell’s flick on and the Colombian swept it high into the net on the half-volley. Craven Cottage reverberated with relief as much as anything as Fulham dared to dream of survival.

Norwich emerged with renewed purpose after half-time, but their early pressure only delivered a Snodgrass drive that was easily smothered by Stockdale. Fulham forced a series of corners by way of response, with Rodallega climbing highest at the far post, only for his downward header to be scrambled off the line by full-back Martin Olsson. The home side were then thanking their captain for a last-ditch intervention of his own as Norwich broke dangerously and Snodgrass seemed to have the simplest of task to tuck Olsson’s inviting pass into an empty net before Hangeland and Fernando Amorebieta converged on him.

As Fulham’s defensive line sunk deeper and deeper, even goalscorer Rodallega was called upon at the back. The forward put his head in where it hurt to divert the returning Michael Turner’s header over his own crossbar. Magath moved to shore up his side’s slender advantage by sending Scott Parker and then William Kvist on as second-half substitutes, with the veteran Mahmadou Diarra withdraw to rapturous applause after running himself to a standstill.

Norwich pressed for an equaliser, but couldn’t create a clear-cut chance in a nervy final ten minutes. Instead, it was Fulham who should have sealed the victory in added time. Rodallega raced clear of the Norwich defence and unselfishly squared it for Dejagah, who went for power, and blazed the ball agonisingly over the bar. It proved academic after Mike Dean’s final whistle and Adams will now turn his attention to conjuring some points from a frightening final four fixtures – against Liverpool, Manchester United, Chelsea and Arsenal – to keep the Canaries afloat.