Rodallega can fire in the run-in, says Hangeland 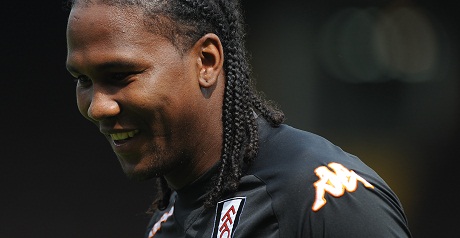 Brede Hangeland has backed super-sub Hugo Rodallega to play a crucial part in Fulham’s run-in after scoring the winner at Aston Villa on Saturday.

The Colombian striker scored his first league goal in more than a year to earn three precious points at Villa Park and, although Rodallega has had to patient and wait for his chance under new manager Felix Magath, the Fulham captain believes the former Wigan forward can make a real impact in the weeks ahead.

Hugo and Ashkan did very well, it was a whole squad effort, and I was delighted we were able to put in a performance like that. I thought everyone involved today, the whole team, got us that victory. I’d like to think [Hugo can play a big part] based on what I saw today. Everyone is important now. It’s all hands to the pump now and it’s pleasing to see players come off the bench and make an impact.

Saturday’s victory lifted Fulham off the bottom of the table but they are still five points from safety and face a make-or-break meeting with Norwich at Craven Cottage this weekend. Hangeland believes that the confidence derived from winning at Aston Villa can give the side a real boost going into a critical run of fixtures.

This is the start of where we want to go. I won’t be pleased until the season’s over and we’re out of the bottom three. That’s what we’re planning to do and we’ll do everything in our power to make sure that happens.