How Fulham can win at Villa 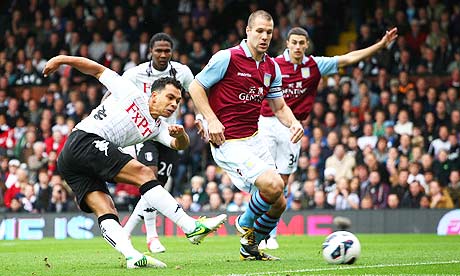 Consistently, I try to see the positives within a season of bleak depression. The last couple of days have seemingly sprung good news, after good news. On Wednesday afternoon, the majority of supporters received an email from the club, announcing that if you buy a season ticket before the 9th of May (the day before the last game of the season); you will be saving £100 compared to the current season. Shahid Khan announced this deal with an open letter to supporters, thanking us all for our support, loyalty and passion, whilst also stating that we deserve nothing less.

Without wanting to glorify injuries, the news coming from Aston Villa with regards to their fitness situation, is another positive to us Fulham supporters. Christian Benteke will miss the rest of the season; and while I wish him a well recovery, it’s a huge loss for Aston Villa to their attacking weaponry. Speaking of attacking weaponry, a doubt for Saturday, due to a bug, is the Villa vice-captain, Gabriel Agbonlahor. The pace and power of Agbonlahor will be sorely missed to fuel Aston Villa’s counter attacking football. Feeling positive? Well, on top of that, our opponents this weekend also have Karim El Ahmadi missing through a groin strain.

It’s very clear to see how Paul Lambert sets his Aston Villa team up. They sit deep, invite teams onto them before countering teams. The losses of Gabriel Agbonlahor and Christian Benteke certainly weaken the damage possible; however, they do have options. It’s likely that the back five for Aston Villa will have one change, Guzan, Lowton, Vlaar, Clark and Bertrand, will remain the same, as will the two midfielders in front of them, Ashley Westwood and Fabian Delph. There’s the consistency throughout the side, but you take out Agbonlahor and Benteke, leaving you wondering what Lambert’s choice will be to attack our side. The likely choice will be to have Marc Albrighton on the right, Aleksander Tonev on the left with Andreas Weimann leading the line something he’s done rarely since breaking through at Aston Villa, though I quote Darren Bent “Andy is one of the best natural finishers I have seen for a long, long time.” Whilst our loanee also compared him to Dean Aston back in 2012. The speed to counter our aged back line is still there, but without the power to really be fearful.

Fulham are still without Kostas Mitroglou and with Darren Bent obviously ineligible, we could see another start for academy products, Cauley Woodrow or Moussa Dembele. It’s also good to see Scott Parker back for us, although he and Steve Sidwell doesn’t seem to work as a midfield pairing, he’s still a big player for us, and arguably our player of the first half of the season. Felix Magath hinted at naming an unchanged eleven, for the first time in god knows how long, “So we could play the same team as last week and maybe Scott Parker will go with us.”

However, I’m sure we’ll see Dejagah start. I’m expecting David Stockdale to keep his place in the line up this weekend, with the back four of Sascha Riether, Johnny Heitinga, Brede Hangeland and Kieran Richardson, though with the return of the suspended Fernando Amorebieta, Magath may wish to ploy Heitinga at right back again. I presume this defensive unit; will be helped by William Kvist and Steve Sidwell. Felix Magath will, I’m guessing, play Ashkan Dejagah on the left flank again, with three goals since Magath was appointed, it’s clear to see that Felix knows how to get the best out of our Iranian. I’m fairly confident that Lewis Holtby will play, but then we come to the “issue” with the right/left flank; the options are, play Pajtim Kasami out of position, put Kieran Richardson on the left-John Arne Riise at full back which means shifting Dejagah to the right, or do we start Patrick Roberts, the unknown quantity? I’m interested in whatever Felix Magath decides. And for me, it’s Cauley Woodrow as the lone striker; the ball needs to stick up, which Woodrow is better at then Dembele. There are a couple of options, possible, but that’s for another time.

The injuries for Aston Villa, are in such key positions, I think they’ll “struggle” to test us defensively, whereas we seem to create a lot of chances, but we need to start scoring some goals. Hopefully, with the positivity raining down upon us, we can get a first goal from an academy player this season and leaving Villa Park victorious.