Fans spurred us on, says Hangeland 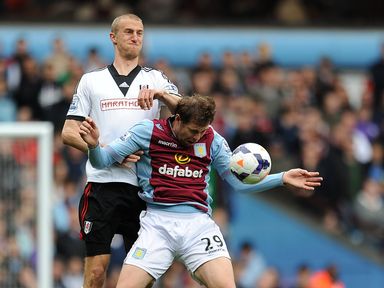 Brede Hangeland has hailed the influence of Fulham’s travelling support in reviving their survival bid during a 2-1 win over Aston Villa on Saturday.

Fulham were roared on by 3,000 fans at Villa and the Fulham captain felt their raucous backing had a significant impact in spurring Felix Magath’s side onto victory, with a late header from Hugo Rodallega securing a precious victory.

I don’t think I’ve ever seen so many of our supporters at a match outside London so that was great for us. The support throughout the game was first-class and it really gave us an extra boost when we needed it. It was a real pleasure to be able to repay all of their support with a win.

When we have support like that it really does help us to dig deep. You need that extra bit of energy sometimes in the Premier League, especially away from home. We have to be very grateful for everybody making the trip and it was good to give them something back.

The Norwegian defender admitted he did fear the worst after Matt Lowton recovered to clear Lewis Holtby’s shot off the line shortly before Rodallega’s winner. The goal-line decision system showed that the ball had narrowly failed to cross the line, but the German seemed destined to score after rounding Brad Guzan and having the whole goal to aim at.

I didn’t need a replay [to see how close it was]. That was the mother all of chances. At that time, I thought that’s just our luck but fortunately it wasn’t decisive. We worked really hard for the win and we’ll do that again next week.