The mysterious case of Kostas Mitroglou 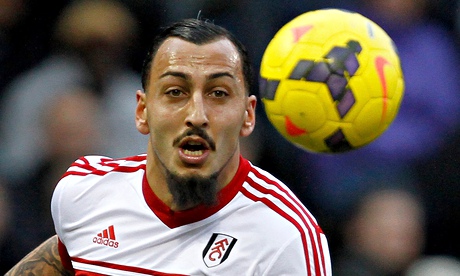 As we are about to disembark the rollercoaster of another disheartening month at Fulham think back to the same stage two months ago, where in about 48 hours we signed six players, including genuinely high quality personnel in the form of Holtby from Tottenham and Kostas Mitroglou, the €12m forward from Olympiacos who had fired in an outrageous amount of goals this season and was attracting attention and plaudits from Dortmund and Arsenal. A new contract increasing his release clause and knee injury put other potential suitors off, allowing lowly Fulham (who two days later would drop to the bottom of the league) to nip in and complete what was, at the time, quite a coup. The antithesis of Berbatov, who we let go to Monaco (is there a place more suitable?), Mitroglou was strong, extrovert, powerful, and a hard worker.

So here we are 58 days on and we have seen him on the pitch twice. The ‘Pistolero’ that was supposed to fire our way to salvation has instead spend most of his time trying to get fit. He made his debut while we were still in the lead at West Brom, coming on for Rodallega, but was clearly unfit – and for me the reason we lost is because we no longer had someone up top applying pressure; Rodallega, for all his faults, is physically adept and a trier, and I believe we would have won if he had stayed on the pitch. Anyway, so we give him a bit more time, he goes off and starts for Greece and does a ‘Diarra’ by picking up a hamstring injury before starting alongside Cauley Woodrow, and ever since their Fulham features have gone in entirely different directions as Woodrow kept his place in the first team while Kostas retreated back to the medical room.

Does this then make Mitroglou the worst purchase ever in Premier League history? What was a huge statement from owner Shahid Khan, responding to calls of underinvestment, has turned out to be a complete flop. Like, on an unimaginable scale. Hopefully he can be back for the last half a dozen games, but if we don’t win today then I fear it’ll be too late anyway. Clearly, we would have been much better off keeping Berbatov (I don’t care what people say, he’s unbelievably good, and in a coherent system would have done really well for us), but on the upside we have seen the uprise of Woodrow, who put in a man of the match display as a lone forward.

If we go down, I think the purchase of Mitroglou will be initially thought of as the nail in the coffin, especially to those outside looking in. However, as far as I can see it, he’s picked up a separate injury to the one he had when he joined, and I think we have also been extraordinarily unlucky. I also think we bought him simply because we decided to let Berbatov go and needed someone to fill his place, but that was rash and short-sighted. It’s a shame because the idea was actually pretty good – we definitely needed, and still do, someone to score goals – but it really hasn’t worked out. We also seemed a bit desperate when we realised he was injured and started enquiring for other forwards, like Heerenveen’s Finnbogason, but in the end we stuck with our guns.

What is important to note is that we signed Mitroglou for four and a half years. If it turns out he has a reduced relegation release clause and we sell him this summer for a loss, then yes, it will be the worst purchase probably in England of all time – and already he would have cost us a lot in wages. But if we go down and he fires us straight back up, and we build a team around him (he’s certainly good enough, and should suit Magath, who I also hope stays) then for the long term it still might work out.

Either way, the situation has been a mess and unfortunate in equally huge measures, and I hope that when he eventually gets fit Mitroglou can prove to use he’s more than an expensive sick note.