Up next: Liverpool (h) 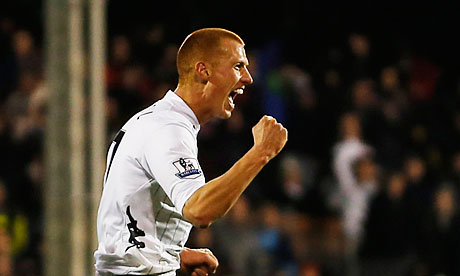 The euphoria over our last-gasp point at Old Trafford has just about subsided now, along with the howls of protest that greeted the prospect of this game being postponed due to the Tube strike. The unexpected draw at the home of the champions’ – plus the valour with which Rene Meulensteen’s men defended for so much of the game – has lifted some of the gloom around Craven Cottage and there may well be some momentum with which to play with ahead of the visit of Liverpool this evening.

Meulensteen might well be considering adopting a similar strategy to the rope-a-dope that worked so well at Manchester United, with Brendan Rodgers’ boasting a fearsome strike force. Dan Burn was outstanding in dealing with United’s aerial bombardment on Sunday and, taking his opportunity from a benched Brede Hangeland, Johnny Heitinga was quietly assured on his Fulham debut. Just as importantly, William Kvist organised excellently in front of the defence and Steve Sidwell had a terrific all-action game in central midfield to give Fulham a fighting chance. A similarly conservative approach could work against Liverpool – but I’d be very surprised if Meulensteen isn’t a little more progressive.

However fearsome they might be at Anfield – and Fulham can attest to their ability to rip sides apart following their own humbling last year – Liverpool aren’t quite the same force on their travels. They have lost four times away from home already this season and, despite looking favourites for fourth place following Saturday’s clinical demolition of Arsenal, will be desperate to improve on a poor run of just two wins in their last nine league away games. Rodgers will rely on Daniel Sturridge, who struck a hat-trick on his last visit to Craven Cottage, and Luis Suarez, who has scored four goals in four appearances against Fulham, to inflict more misery on the league’s weakest defence.

If Fulham are to come out of their shell more than many expect tonight, it might provide an opportunity for Lewis Holtby, impressive on his debut against Southampton, to display more of the kind of delicious range of passing that found Sidwell in oceans of space for the opening goal at Old Trafford. Holtby’s all-action displays have quickly made him a popular addition to the ranks and, crucially given the lack of time left to rescue Fulham’s frankly forgettable season, the German midfielder has hit the ground running. Meulensteen moved into an advanced central role against United and that terrific through ball saw the visitors take an early lead. Keeping Holtby in a central position will be vital if Fulham are to come close to winning the midfield battle.

Meulensteen was brave enough to leave out some of his senior players for a game that could have cut his side adrift on Sunday. Whilst this might be the type of game a character like Scott Parker will relish, his return could be harsh on the likes of Ryan Tunnicliffe, who did nothing wrong on his Premier League debut. Tunnicliffe, more of a box-to-box central midfielder, was workmanlike and willing in a wide role against his former employers and deserves another opportunity to impress again this evening. The same energy which Meulensteen underlined as crucial at Old Trafford will be needed against another opponent that plays a high-octane brand of football.

Perhaps the Dutchman’s biggest decision will be who will lead the line against Liverpool. There’s little chance of seeing Hugo Rodallega’s raw pace after his reaction to being substituted against Sheffield United last week – and his subsequent criticism of his manager to the Colombian media – whilst Darren Bent’s brittle confidence will have been boosted by his late equaliser (which was exactly the kind of goal poaching we’ve not seen enough since he joined on loan from Aston Villa). But young Muamer Tankovic has soon little sparks of class in his recent run in the first team, such as the clever run to lose Vidic for Sidwell’s goal and the sprint and pass to release the impressive Kieran Richardson just before half time, and it would be harsh to exclude him now. I’d be tempted to plump for an unchanged side.