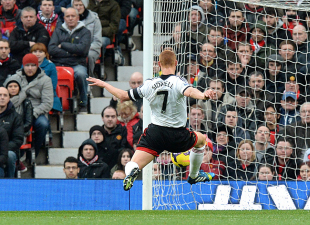 Steve Sidwell says that Fulham’s absorbing draw at Old Trafford could end up being a ‘massive point’ for the club in their battle against relegation.

The stand-in skipper scored Fulham’s opener against Manchester United after nineteen minutes, but their defensive heroics looked to all be in vain once a quickfire double from Robin van Persie and Michael Carrick gave United the lead with ten minutes to go. But, deep into stoppage time, Sidwell played a crucial part in the move that led to Darren Bent’s dramatic equaliser, and the midfielder hopes that will give Fulham the momentum they need to drag themselves away from the foot of the Premier League table.

It’s massive. I’m speechless, really. We put a lot of effort in, every one of us, defended well, a lot, but have come away with a point. Brilliant.

It was hard. Everyone on the pitch put a great shift in. It’s never easy coming here, we rode our luck a lot but came away with a point and hopefully we can kick on now for the rest of the season.

It’s not the best way to come and play at Old Trafford, you know you are going to be soaking up pressure for 90 minutes. We had chances to maybe put the game to bed in the first half, didn’t take them, but we deserved a point.