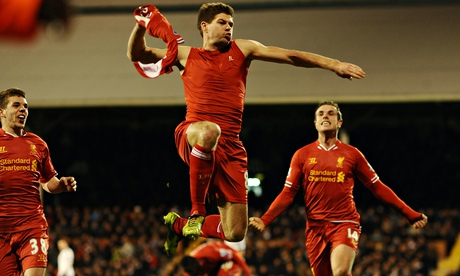 Steven Gerrard’s ninetieth-minute penalty meant another gallant and gutsy Fulham display counted for nothing at Craven Cottage this evening. Twice Fulham took the lead against Liverpool, whose defence looked akin to a side battling the drop rather than contesting the Champions’ League places, but they finished a pulsating encounter without anything to show for their admirable endeavour and Rene Meulensteen’s men now find themselves four points away from safety at the foot of the Premier League.

It all began so promisingly with sharp interplay with the lively Lewis Holtby, Darren Bent and Ryan Tunnicliffe. Meulensteen largely kept faith with the team that had battled to a surprise draw at Manchester United on Sunday, only opting to bring Bent into his starting line-up for young Muamer Tankovic. But any suggestion that Fulham were going to attempt to stifle their opponents and ape the tactics that had worked so well at Old Trafford seemed wide of the mark as the home side went forward at will from the off.

Tunnicliffe, making his home debut after a deadline day switch from Manchester United, almost had an immediate impact. It took just 43 seconds for the midfielder to finish a flowing move with a powerful drive from the right angle of the box and a surprised Simon Mignolet had to palm away his effort. A succession of early corners pushed Liverpool back and Fulham’s football was bright and progressive. Holtby scampered into dangerous position behind Bent, troubling a jittery visiting defence to such an extent that it was little surprise that the bottom club had a lead eight minutes in.

The goal owed much to the persistence of Kieran Richardson, who had another storming game down the left side, seeming revatilised when operating as a winger rather than a hesitant full-back. His low cross looked unthreatening, but Koulo Toure’s panicked swing of a right foot suggested otherwise, and the ball sliced off his instep and past Mignolet in the blink of an eye. A delirious Craven Cottage erupted – and then prayed for the kind of rearguard action that so frustrated the champions at the weekend.

They nearly got it too. Fulham were disciplined and determined, largely stifling the penetrative strikeforce of Daniel Sturridge and Luis Suarez. Liverpool saw plenty of the ball, but had precious little to show for their possession. Suarez’s deflection shot was beaten away at his near post by Stekelenburg but, with William Kvist again exceptional at guarding the space in front of Fulham’s back four, it looked as though the hosts might make it to the interval unscathed.

That was before Steven Gerrard seized upon a risky crossfield pass from Holtby and stroked a sublime through ball between the Fulham centre halves. Away sped Sturridge and the England international, who scored a hat-trick to help Liverpool come from behind here last season, measured a magnificent finish across Stekelenburg and in via the far post. Liverpool were level – and at the worst possible team for Meulensteen’s men.

The visitors dictated the pace and flow of the contest after their equaliser, with Gerrard becoming more prominent, and it seemed inconceivable that they wouldn’t go on and prize open a deep-lying Fulham defence. But the hosts weren’t discouraged and profited from another piece of dismal defending. Sascha Riether’s right-wing cross looked innocuous only for Martin Skrtel’s sketchy clearance to present Richardson with the simplest of finishes inside the six-yard box. Suddenly belief surged through the strugglers again.

Try as they might, though, the hosts’ couldn’t hold onto their lead. Liverpool penned them back with more pretty possession and a superb strike from Phillipe Coutinho levelled the contest. The little Brazilian dribbled the ball across the Fulham box and, as a wilting defence backed off, fired a shot low past Stekelenburg to level the contest. It might have taken a little nick off Kvist, but that counted for little. The momentum had swung decisively towards the visitors.

Stekelenburg departed clutching his face after he bravely dove at Suarez’s feet to prevent the Uruguayan snatching his fifth goal in five appearances against Fulham and Coutinho passed up two easier chances as time ticked away, but a rash challenge from Riether on Sturridge in the last minute proved painfully costly. Gerrard thumped the penalty past substitute goalkeeper David Stockdale and sprinted off to celebrate gleefully with the travelling fans, leaving a crestfallen Fulham side to come to terms with the brutal finality of it all.