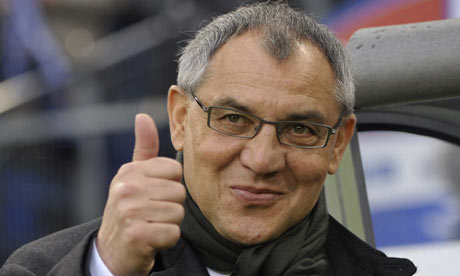 Fulham have replaced Rene Meulensteen with Felix Magath in a desperate bid to save their Premier League status.

Former Manchester United coach Meulensteen had only been in charge at Craven Cottage since December 1, having arrived a fortnight earlier as an assistant to then manager Martin Jol. Meulensteen had been unable to halt Fulham’s alarming slide into relegation trouble, with the club slipping to the bottom of the Premier League table, although their last two performances – an impressive draw at Old Trafford and an agonising home defeat by Liverpool – had hinted at an improvement.

In a statement released this evening, Fulham chairman Shahid Khan confirmed the appointment of Magath on an eighteen-month contract:

I am very happy to welcome Felix Magath to Fulham Football Club. Felix is an accomplished manager with multiple honours in the Bundesliga and a hunger to replicate his success with Fulham in the Premier League.

I’m especially impressed with the reputation Felix has for coming into clubs at difficult times, often late in the season, and lifting them to their potential and beyond. Felix knows that is precisely the task awaiting him at Fulham, and he made it abundantly clear that he wants and is ready for the opportunity.

Our club has shown promise in recent matches, but the fact is we have not won a league match since January 1. Given our form, we can no longer merely hope that our fortunes will finally turn. And with 12 matches remaining and at least four points separating us from safety, we certainly can no longer post empty results. Action was required.

Alistair Mackintosh did a wonderful job during the January transfer window to improve our club. This week, Alistair recommended Felix, with his history of producing results for clubs with similar challenges as ours, as the new manager of Fulham. Alistair’s recommendation received my complete approval and Felix has my unequivocal support.

Magath has never managed outside the Bundesliga in a long managerial career that saw him win back-to-back German doubles with Bayern Munich. He has also been in charge of Hamburg, Nurnberg, Werder Bremen, Eintracht Frankfurt, Stuttgart, Schalke and two stints with Wolfsburg.

They have hit the panic button on emotion and fear – but hey ho, that’s football. I knew the owners were freaking out a little bit that there was the possibility of the club going down.

The way forward that we have discussed with the club was about longevity and in this case it is clearly an act of fear. I have not had a lot of time and people who came to the Manchester United and Liverpool games could see what I was trying to put in place.