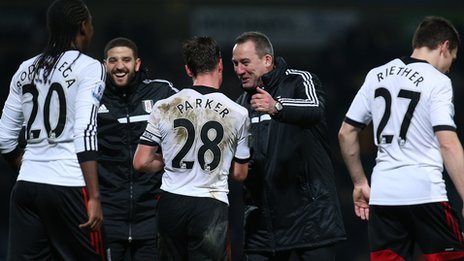 The euphoria of Fulham’s first Boxing Day victory in a decade might not have died down yet, but Rene Meulensteen will know that his side can’t afford to rest on their laurels even after Scott Parker’s sensational strike secured a crucial win at Norwich. For all the positives from a resilient display at Carrow Road, Fulham remain in the bottom three and face another tricky away trip to Hull City, where they haven’t won since 1996.

What’s more, Steve Bruce has delivered a far better start to Hull’s latest return to the top flight than anyone had expected. Flexible in his formations – switching from 4-4-2, to 4-4-1-1 and even to a back three – Bruce made shrewd moves in the transfer market over the summer and assembled a side that won’t take backward step against anyone. Witness the rousing start to their home game against Manchester United on Thursday. Hull were enterprising in their approach and it wasn’t route one, either: the Tigers play good football, with the intelligence of Tom Huddlestone, arguably the best player on the pitch on Boxing Day, and Jake Livermore to the fore in central midfield. The hosts were desperately unfortunate not to take something from their clash with United and will target this fixture as the one to end a winless run that now stretches to five fixtures.

Hull will take confidence from their recent record against Fulham. They won their first Premier League fixture against the Whites on the opening day in 2008 and have won three of the four top-flight clashes between the sides. Bruce’s side possess the best home defensive record in the league, despite surrendering that two-goal lead against United on Boxing Day. Hull have only conceded six goals at the KC Stadium so far this season – and three of those game against the champions. Former Fulham full-back Liam Rosenior, now a popular figure on Humberside, could replace Maynor Figueroa, who was at fault for two of United’s goals.

City have a far more balanced side than the last time they were in the top flight. Huddlestone remains one of the league’s best passers and his elegance and poise on the ball offers a timely remainder of why he was once one of the hottest properties in English game. He has created thirty chances from central midfield, but Hull’s threat is far more varied than just the former Tottenham midfielder. George Boyd was excellent as a late substitute on Thursday,  whilst Yannick Sagbo has been quietly effective up front. The former Evian striker might only have mustered two goals in his first four months in the Premier League, but he has created 13 chances for his side and proved a handful for a host of defences, even when operating as a lone striker.

Bruce might be forced into as many as four changes to the side that pushed United all the way on Boxing Day. Goalkeeper Alan McGregor felt the full effect of a collision with Ashley Young and is likely to be replaced by the former Newcastle custodian Steve Harper, whilst the knee injury sustained by David Meyler means Robert Koren could come into midfield. The manager might also be without his son, Alex, in central defence after feeling the effects of a calf strain and Rosenior is pushing for a return at full-back. Hull have already shocked Liverpool at home this season – so Meulensteen should be under no illusions as to what to expect.

David Stockdale will certainly know all about what lies ahead this afternoon. The 28 year-old goalkeeper deputised for Maarten Stekelenburg at Norwich after the Dutch international injured his ankle in Fulham’s final training session before Christmas and Stockdale, who made 24 appearances on loan at the KC Stadium as Hull earned promotion from the Championship, will desperate to perform well on his return. Stockdale’s inclusion was one of five changes from the side that were beaten by Manchester City – and Meulensteen could choose to shuffle his pack once again.

Giorgos Karagounis could come back into midfield after missing the win at Carrow Road, although dropping Pajtim Kasami after his goalscoring return to the team would be exceptionally harsh. The Swiss international’s energy and eye from a pass from deep gave Fulham’s midfield a little more drive on Boxing Day and the main question will be whether Ashkan Dejagah steps up from the substitutes’ bench in one of the wider positions. Meulensteen also remains hopeful that Dimitar Berbatov can finally shake off the groin strain that has ruled the Bulgarian striker out of the last two matches. In the event that Berbatov passes his fitness test today, Meulensteen will have to decide whether he can afford to field both the former Manchester United forward and Adel Taarabt, so impressive as a lone striker on his last two outings, in the same side. Fulham might need the mercurial talents of both men to unlock a stubborn Hull regard, even if the Moroccan might have to play from the left or just behind Berbatov.