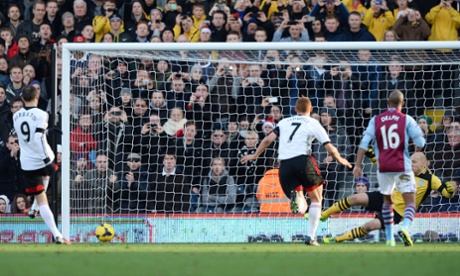 What a difference a week makes. Fulham, so abject at West Ham in the last game of Martin Jol’s reign, were flawless in dispatching Aston Villa at Craven Cottage this afternoon. The confidence accrued from a positive performance in midweek against Tottenham coarsed through the veins of Rene Meulensteen’s charges and such was their dominance that the relegation-threatened side might have trebled their two-goal winning margin. Central to Fulham’s success was the mercurial striker Dimitar Berbatov, who tucked away a first-half spot-kick with the minimum of fuss, making light of his supposed unhappiness at being in the midst of a relegation scrap.

The transformation under Meulensteen, intially introduced as a coach alongside the beleaguered Jol, has been marked. Fulham played with genuine width, pace and purpose and penned Aston Villa, who boasted an impeccable away record before this setback, back into their own half. Fulham’s energy was evident from the outset. Ashkan Dejagah, a peripheral figure under Jol in the early months of the season, was denied an early goal by a splendid saving tackle from Ciaran Clark and the lively Alex Kacaniklic had a shot scrambled off the line. Fulham’s problems this season have stemmed from failing to make their pressure pay – but the alertness of Steve Sidwell meant they had a lead to build upon this time.

Berbatov played in the pacey Dejagah, who threaded a clever pass through to the onrushing Sidwell, who appeared to be second favourite to reach the ball ahead of Leandro Bacuna. Sidwell showed his tigerish side, which has previously got him into trouble – muscling off the right back’s challenge – and produced a sumptuous finish, lifting the ball over a hapless Brad Guzan and into the bottom corner from the tightest of angles.

The relief around Craven Cottage was palpable, but Fulham had led Tottenham on Wednesday and surrendered their advantage. There was little prospect of that once Berbatov had easily converted a spot-kick, won by Kacaniklic when he drew a foul from the frustrated Bacuna. Berbatov, the artisan, was at the heart of the move that led to the penalty, releasing Kacaniklic with a pass of the highest quality having skipped away from the centre circle to reach a clearance and turn defence into attack.

Such was Fulham’s control of this contest that Meulensteen could justifiably have been disappointed that his side didn’t increase their lead after the break. The new manager’s move to replace Pajtim Kasami with Sidwell meant Fulham matched Villa’s three-man central midfield and the work rate of Giorgos Karagounis and Scott Parker meant Villa’s creative midfielders struggle to make an impression on proceedings. Berbatov almost added a second when he guided a Dejagah cross agonisingly wide, whilst the excellent Philippe Senderos brought a fine save from Guzan when he found himself free at a corner.

Two of Fulham’s veterans also went close to adding to their lead. The clever Karagounis tricked his way past Fabian Delph and carried the ball threateningly towards goal before lifting his shot over the bar, whilst John Arne Riise, who had already sent a couple of sighters wide of goal from long-range, headed against the post. The Norweigan left-back, recently recalled to the side when he seemed poised for the exit door come January, seems destined never to score for the Whites.

Villa were lethargic and leggy. They had a brief spell of pressure while the game was still level, but the otherwise anonymous Christian Benteke headed a cross from Gabriel Agbonlahor wide, and had a snapshot saved by Maarten Stekelenburg. Paul Lambert was right to insist that Mike Dean should have awarded a penalty when Aaron Hughes tripped Agbonlahor in the second half, but even the Villa manager had to admit his side were distinctly second best.